'Give it Over To The Fire' 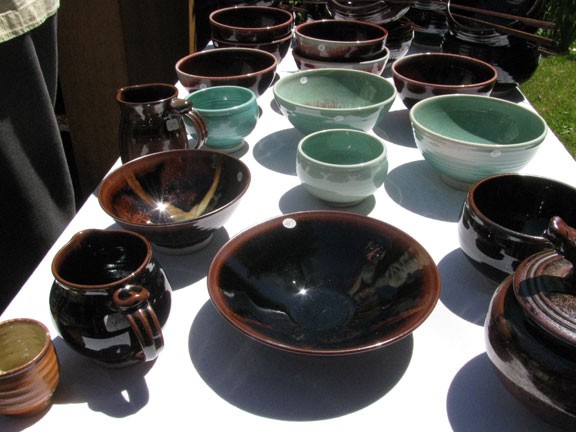 The Superstars: See your favorite artists. Start with John Wesa in the north, hit Alan Sandborn in Arcata, finish up with Kathy O'Leary and the C Street galleries in Eureka. You love their work; rub elbows; they're awesome.

The Geographic: Focused and economic. Hit the hotspots. There are four artists in Arcata's Stewart Building, four in Samoa, six around the C Street galleries. Stick to Ferndale and Fortuna and you'll visit eight studios. Hop on your bike, save gas, feel superior.

Where the Day Takes You: Drive through town and see an "Open Studios" sign. Realize you forgot what weekend it was. Stop, visit, pick up a guide. See what moves you. Carry on. 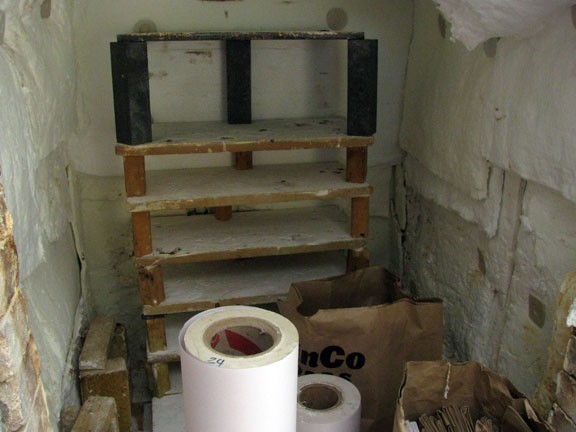 This year's strategy: The Medium. Pick a medium, find the artists. For me on Saturday it was fire, specifically pottery. First stop: Mark Young and his talented wife Lorraine Lindley. Mark is a potter; Lorraine works with glass and mosaics. Their home and studio is a showcase of earthenware and iridescence. Shortly after we arrived, a curious studio-goer asked Mark about his kiln, "Is this where you fire your pots?" Mark began by describing how the fire gets into the kiln, its gas lines, the firebrick-and-space-shuttle-tech-fiberglass insulation and how the pots are stacked in his gas-fueled kiln. "Then you give it over to the fire. Sometimes you get surprised."

Lorraine's mosaics are sparkly and luxurious. Switchplates, picture frames, gazing balls, tables and chairs covered in iridescent glass, tiny shells, brass charms and river-smoothed pebbles. The stained glass carp swimming in a mirrored glass pond invite you to touch them. And you can, too, without fear of a cut. All sharp edges are smoothed over with a Dremel tool.

Second stop: Dave Zdrazil and Shannon Sullivan. Their home, workshop and wood-fired kiln overlook the Eureka Slough. Some of Shannon's work is traditional shapes — cups, bowls, jars, vases — but much of it is mysterious organic shapes and cutaways that expose a secret interiors, evocative of sea urchins and geodes. Dave, too, does work that is inspired by traditional shapes but not bound by them. Inch-thick slabs of clay decorated with heavy lines and earthy glazes could function as trays but are so much more interesting than mere serving pieces. They are quite heavy, but their gently curved shapes and hidden feet create an illusion of levitation.

Only two stops? If you're at all interested in the process, you have to — need to — talk to the artists. Take your time and ask them about their work, their media, their processes. It will create a personal connection with the pieces you buy. You'll forge connections, even friendships. There's still time to visit the open studios next weekend, June 8 and 9. Many artists are also happy to open their studios by appointment if you can't make the tour this time. Pick up a copy of this week's Journal for a map and guide, or visit www.northcoastopenstudios.com.