Made in Humboldt: 'Weed the Game' 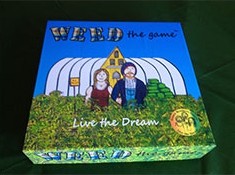 Who says stoners are lazy? Jim Gray, a resident of McKinleyville, has launched a company called Stoner Brothers Games, and his first product, set to launch next month, is WEED the Game.

We got a press release describing the board game thusly:

Players buy seeds and plants and try to grow pounds of weed for cash. Players try to avoid going to jail, getting ripped off and loosing [sic] pounds and plants. The player with the most cash WiNS!

In other words, it's exactly like real life for certain segments of our community. Does the game celebrate this lifestyle? Well, the box does say "Live the Dream," with a cartoony American Gothic homage that shows a farm couple hip-deep in ganja. The blurb delights:

You can even win from jail if you are sitting on a pile of cash.

The company has another product already in the works -- a marijuana trivia game called Legalize It in 50 States. "We plan to release a new board game every year – created right here in Humboldt County," says the press release. WEED the Game costs $42 -- or 420 dimes. Heh heh.