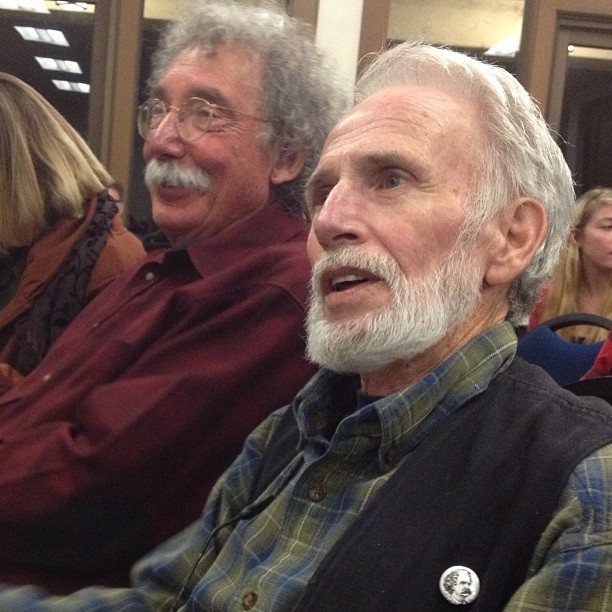 The novelist/poet Jim Dodge launched a short Humboldt tour earlier this week at HSU, reading from his book Fup, to a crowded room. The readings continue with stops at College of the Redwoods Friday, Nov 15, at 10 a.m., at the CR Mendocino Coast Campus on Tuesday, Nov. 19, at 4 p.m. concluding on his old stomping grounds, Arcata's Northtown Books, Dec. 6, at 7 p.m. on Arts Arcata Friday.
Fup has been chosen as Book of the Year at both local colleges, an honor that Dodge did not actively campaign for. Jim explained that the book, about a grandfather, his grandson and a duck named Fup, was a sort an odd bird. It's often described as a novel, but length wise it doesn't fit the criteria. At around 99 pages it's also too short for the novella, and too long for a short story. He was proud to note that a publisher in one of many reprintings described it on the cover simply as "a story."
Dodge was introduced by the poet Jerry Martin who offered a tribute to his friend. Dodge then read the fast moving first chapter of his "story," followed by a handful of poems and a prose piece, "a true story." Of course there's plenty of truth in everything he read, and beauty, and comedy.

On a side note, the first draft of this post was created with a dictation program that did not recognize the title of the book, rendering it as "f*ck" (with asterisk included). Perhaps because of my poor pronunciation, the author's names were also misunderstood by the voice app, replacing Jerry Martien with "Jerry Martini" and Dodge with "God."