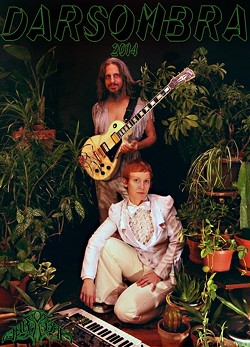 "I'm Ann from Darsombra. We are an audio-visual live performance experience (a band!), and we've got a show coming up in Eureka at the Ink Annex. The show is part of an eight-week cross-country tour and it marks the 20th anniversary of my bandmate Brian Daniloski's first tour around the country with his old band Meatjack. That was so long ago that they were booking the tour during the tour from pay phones!"


Daniloski alternates between searing guitar riffs, leads, loops, mammoth vocal swells and soundscapes. It's one part metal, one part psychedelic rock, one part experimental with dashes of prog, glam and krautrock. Filmmaker Ann Everton projects her kinetic, psychotropic videos specifically composed to Daniloski's music, engulfing the audience within the trip, as well as providing occasional accompaniment on vocals and synthesizer.

Your final show features the guitar brilliance of Scott Pemberton, a musician often compared to Jimi Hendrix, Dick Dale and James Brown, who will be pleased to entertain you at Humboldt Brews for a mere $10 at the door. Show starts at 9 p.m. and is 21-and-over.