Tonight's Setlist: The Magnificence that is Saturday, April 12.

No one will accuse the folks at RampArt of being slackers. Establishing an indoor skate-art park with a focus on providing something cool for kids sounds like the kind of idea some well-intentioned post-college kids brainstorm about one afternoon, only to bail out when the reality of fundraising and permitting sets in. But the RampArt people made it happen — and after a year of success, the next step is raising funds for a new bowl. This is happening through a party that incorporates both beginner and advanced skate contests, a chili cookoff, live painting by Matt Beard and — relevant to this column — live music by Imperial Destructo, (who are is celebrating the releaset of their its new album, Earth Equality,), The Rough Cuts and Adult Crash, who play Minor Threat covers. I love that there's a band doing Minor Threat covers. Imperial Destructo describes the band's sound itself as "a skateboard inspired punk rock band with the motivation to dissolve the empires that control our lives such as corporations and greed." I'd call it old-school skatepunk that leaves a slight, familiar tang of metal in your mouth. Think Bad Brains or Suicidal Tendencies. Music starts at 8 p.m., cover is sliding-scale and, hey, all ages! Go to www.rampartskatepark.org for full details.

Did you realize that Tuesday was the 20-year anniversary of Kurt Cobain's suicide? That explains all the Nirvana retrospectives coloring supermarket checkout stands and local bookseller shelves. In his Pitchfork column, Stephen Deusner wondered what could possibly be left to say about Cobain and Nirvana, and whether or not the millennials who "never knew the band in the present tense" feel the influence. One could ask this of The Wild Lungs, a young band whose raw punky sound is rife with pop hooks and who can be experienced live at the Alibi Saturday night, along with Portland's Lubec (insert "dream of the '90s" reference). Reminiscent of The Cure, Lubec's "Local Celebrity" track suggests the band's brand of pop is both more sophisticated and more retro. Should be a great show. Music starts around 11 p.m., cover is $5 and you must be 21-or-over. 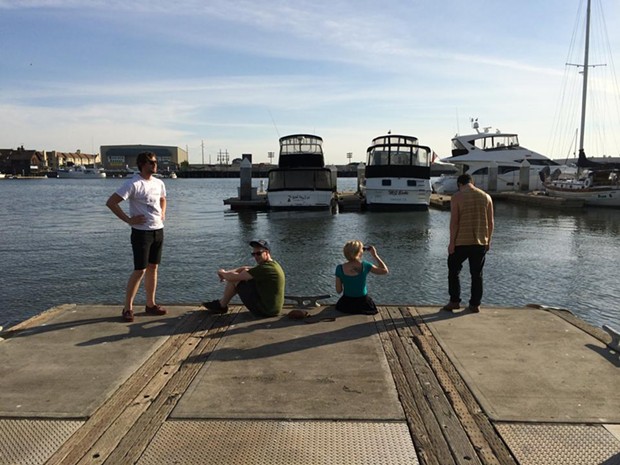 Oh, those wacky clowns! If you relate to rocking, boat pants and/or drunk uncles and share an interest in Scandinavian love, moustaches, pigeons and/or "butt stuff," you'll be thrilled to know about Flock of Foreigners, a band of vagabond artists from all over the world currently living in Blue Lake and studying at the, ahem, Dell'Arte International School of Physical Theatre. Logger Bar, 9 p.m., free, 21-and-over.

If you want to get dressed up and dance, PressureAnya's introducing Abruzzi After Dark. This party begins at 10 p.m. and is $10, but guests receive a $5 coupon toward a drink. Note: bar's open, kitchen's closed. Ages 21-and-over.

Back in Eureka, the Siren's Song Tavern hosts Junk Parlor, a gypsy funk rock band from San Francisco, with local support from Kaptain Kirk's Kosmic Koncoction, an eclectic mayhem of the third kind. Show starts at 9 p.m., is free and all ages.


Finally, the sexy and scandalous Cliff Dallas and the Death Valley Troubadors play Six Rivers Brewery. Also free! But requires you to be of legal drinking age. Music starts after 9 p.m.

Some other nights exist, too. Full Setlist for details.