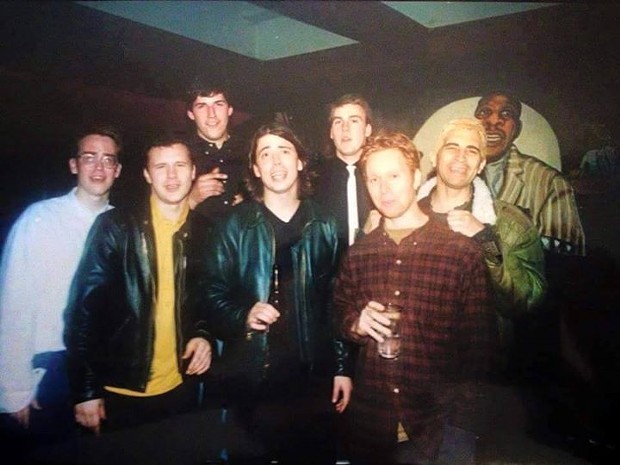 We almost missed making note of an anniversary near and dear to longtime A-towners' hearts. Thankfully, British weekly music mag NME reminded us about the significance of Feb. 23, 1995: Back To The Foo-ture: 20 Years On, The Story Of Foo Fighters' First Ever Show.

The story starts off slagging on Arcata as a place "where not much happens," before launching into a description of how "the town became a footnote on the story of arguably the biggest band on the planet." Complete with quotes from our own Johnny "DJ Red" Ferrington and former Journal staffer Bob Doran (who wrote for the Union at the time), we're treated to what it was like, way back when.


The owners of the Jambalaya thought it was a joke when they got the call. Dave Grohl wanted to play with his new band the following night? A man who, with Nirvana, had catalyzed a total rewiring of guitar music – from the goonish, oversexed, poodle-haired pomp of 1980 rock to the viciously raw nihilism of grunge, defining a generation along the way – wanted to debut his highly anticipated new music at the 220-capacity Jambalaya? Here in sleepy Arcata?

And the by-all-accounts blistering set wasn't the end of it. The Foos also went bowling! DJ Red took slight issue with the NME version of this story, noting on his Facebook page that he invited Grohl and the band to come bowling with a group of Arcata Bowl regulars. "Dave was an excellent bowler, and the fact that he accepted my offer (really, it was a challenge) is testament to what a down-to-earth dude he is."

On the downside, you can't bowl in Arcata any more and the Foo Fighters aren't likely to return any time soon. On the upside, pizza by the slice! And we still have a relatively rockin' scene, for a place "where not much happens." And who knows? Given what a down-to-earth dude he is, maybe Grohl and company'll get the itch to return to their roots once again...