Polar Extremes: How We View Ourselves Vs. How the World Views Us 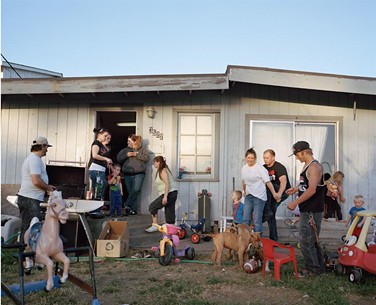 Poverty. Sadness. A psychoactive tinge? Dudes, did you know we have a landscape that is "very psychedelic?" That's according to photographer Curran Hatleberg, recipient of a 2015 grant from Magnum Foundation's Emergency Fund and the 2014 Individual Photographer's Fellowship from the Aaron Siskind Foundation. Hatleberg, who spent the 2013 fall semester teaching photography at College of the Redwoods, has a book featuring our region, Lost Coast, coming out in September. According to Hatleberg, the photos included in this preview from Vice Magazine, are "just a teaser." He held some of his favorites back.

Hatleberg, who spent six months here, says that Humboldt still remains "an enigma" to him. According to his Vice interview, people here "exist in a kind of dream state, propped up by the mythology of the Pacific Northwest."

Hatleberg says his subjects were extremely welcoming. The photographer spent a lot of time snapping shots tourists would be unlikely to frame: the top of a sawmill, a cluttered backyard, the back of a pickup truck. So how do you capture scenes of poverty without exploiting your subject? Are his frames a poor representation of where we're from, a way to titillate the middle class with our region's unsophisticated sensibilities?

"I value the time that people share with me, and I’m honored to learn about people and places that I’m not from," says Hatleberg. "For strangers to give me the time to spend with them, it’s a privilege and luxury to have."

He adds that "you can’t go someplace for six months and really understand it fully. At the end of the day I think I had more questions than answers."

For a perspective on Humboldt County from the inside, here are a few photo essays to check out:

Countering the myth of the jean-centric and fashion-phobic: Behold! Humboldt's Got Style.

Spring in Humboldt shows off some of what we get to see on our commutes.

The Roll on the Mattole: Lest we forget, here's a signature SoHum fund-raising barnburner for you.