Not everybody remembers when John Travolta was John Travolta — lanky, pre-Xenu Travolta with a topiary of a pompadour (watch the hair!) that was all his own. His guileless break-out performance in Saturday Night Fever (1977), along with a Bee Gees soundtrack that makes you question your punk and rock loyalties, is a polyester time capsule of the era. Spin into the Arcata Theatre Lounge on Friday, Aug. 7 at 8 p.m. and see it in all its sparkling glory ($5). 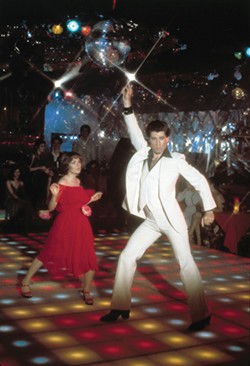 The scene is pre-gentrification Brooklyn under the shadow of the Verrazano Bridge (read: no craft beer, all mustaches are un-ironic). Disco Don Juan Tony (Travolta) and his crew of leather-jacketed, neighborhood tough guys (who were going to White Castle before the Beastie Boys, Harold or Kumar) don't have much going for them. What Tony does have is some sweet moves on the dance floor and a flashy white suit in which to escape the fighting at home and the grim arc of his future. There's plenty of the iconic, oft-parodied disco dancing and the drama of the big competition, but also a trapped bridge-and-tunnel class frustration bubbling forth in self-destruction, violence, racism and misogyny. It's even got an honest-to-God existential crisis.

And there's only one way out of that. Comb your hair, put on your best shirt, hit the street and strut.