Humboldt Arts Council Gets a Little Walkin' Around Money 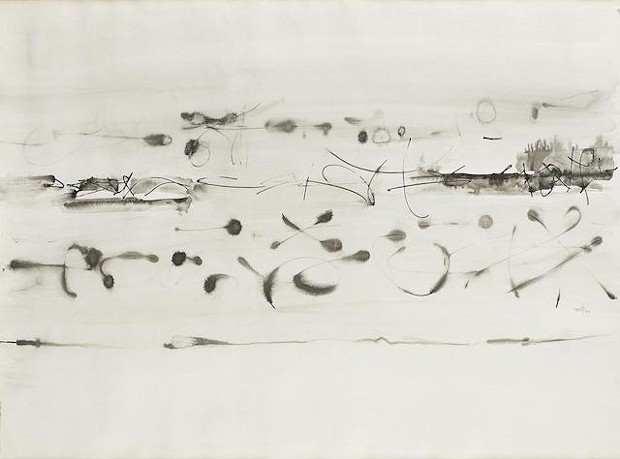 The Humboldt Arts Council is working with a little less red these days. On June 11 the council, which operates the Morris Graves Museum of Art and maintains Morris Graves' collection, sold six ink on paper drawings by V.S. Gaitonde to an anonymous bidder through Bonhams Fine Art Auctioneers in London. The drawings, purchased by Graves on a 1963 trip to the artist's studio in India, brought the HAC a cool $1 million after Bonhams took its cut.

Bonhams had contacted Robert and Desiree Yarber of the Morris Graves Foundation in regard to Gaitonde oil paintings for which the auction house was gathering documentation. Turns out Morris Graves had an eye for investment as well as aesthetics, as the late Gaitonde, who died in 2001, is now regarded as one of India's most important modern artists. The Yarbers had gifted the ink drawings to the HAC in the mid 1990s and they approached the HAC with the idea of selling them to establish an endowment fund that would continue with the maintenance and expansion of its permanent collection.

And yet this windfall won't solve all the HAC's financial worries. As previously reported by the Journal, the HAC operated at a deficit of $25,000 in the 2012-2015 fiscal year, and running the Morris Graves Museum (just one of its programs) costs $1,000 per day. It was this financial pressure that led the museum to begin charging $5 admission for adults and $2 for seniors and students (entry for children and on Arts Alive! nights remain free). According Jemima Harr, the HAC's executive director and curator, the move yielded 160 new members and hasn't significantly changed overall attendance.

Harr said the nonprofit's goal is an endowment of $4 million in order to become self-sufficient. Beyond establishing the money from the sale as the Humboldt Arts Council Endowment Fund, the organization does not yet have an investment plan and is looking over proposals from financial professionals. "We're art people," said Harr, "not math people." She also stated that the council is not planning on selling any more art from the collection. So if you're looking for something for over the couch, you can forget any more Gaitondes, but you can still pick up a nice Floyd Bettiga watercolor or oil at the HAC benefit sale today through Sunday, Aug. 23.