Kilts. Bagpipes. Whiskey. Need more proof that the Scots throw a good party? Never mind that they invented golf, they brought the world its best adult beverage and their national animal is the unicorn. Aye, they know how to have a good time and the North Coast Scottish Society shows us how at the Frolic in the Glen and Highland Games on Saturday, Sept. 19 at Rohner Park from 10 a.m. to 5 p.m. (free). 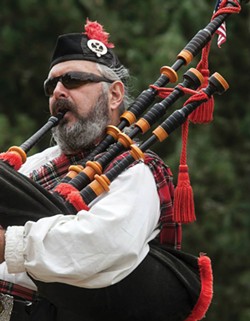 The annual event began as a gathering of local Scots four years ago and has grown larger every year. This year, local clans are joined by the Shamrock Club of Sacramento, Scots from Dixon, and a beard oil company is sponsoring the frolic's first Beard Contest. From the Humboldt Highlanders pipe band opening welcome at 10 a.m. to the closing thank you at 5 p.m., expect music, dancing, eating and more. Laurene Thorpe of the North Coast Scottish Society says, "The event is a way to let the public see what we're all about, learn about Scotland and Celtic history." Peruse Celtic-themed arts and crafts booths, have a tarot reading or get a Celtic henna tattoo. There's also hair braiding, cooking demonstrations and, for the wee ones, bouncy castles and story-telling. Lay down a few coins for the 50/50 raffles and a raffle for (what else?) a huge flask and bottle of the good stuff. Enjoy performances by the Academy of Irish Dance and live music by the Vanishing Pints, Michael Ross and Twisted Thistle. Kilts are wildly popular (have they ever really gone oot of style?) and you can see what the men are sporting at the Bonnie Knees contest. The lads line up while the lasses have a look and let 'em know who's the bees knees. Don't forget the games: caber toss, Wellie toss, clan vs. clan tug of war, stone put and ax throwing (heads up, everybody). New this year: haggis, meat pies and bangers for sale. So really, there's no reason to miss this shindig. There's a bit 'o fun for everyone.