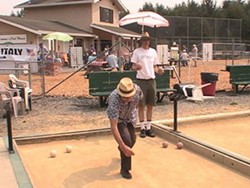 These days you can't throw a bocce ball without hitting, well, a bocce ball. Might as well join 'em. Have a ball this Sunday, Sept. 27 from 10 a.m. to 3 p.m. at the Sons of Italy Italian Festival at Redwood Fields Bocce Court in Cutten (free admission). This family friendly festa features a bocce ball tournament, raffle and live music by the Golden State Accordion Club's Humboldt Accordionaires (they're everywhere this weekend). Enjoy tasty bocce dogs (Italian sausage, grilled onions and peppers on a French roll), hot dogs, drinks, desserts and camaraderie while learning about Italian culture and tradition. The bocce tournament is open to all ages and experience levels. Sign up your team and battle "Bocced Fossils," "Bocce Bambinos," "Barely Bocce," "Pastaluego" and others for bragging rights. Proceeds from the event go to the Pinochi and Stagnoli scholarship funds. Have fun and help the community in true stile Italiano.

Maybe you like a little beer with your bocce? After all, whose accuracy isn't better after a few drinks? Sponsored by Ferndale Kiwanis, Lost Coast Brewery and Ferndale Bocce Court, check out the Lost Coast Beer & Bocce Tournament on Sept. 26 from 9 a.m. to 4 p.m. at Ferndale Firemen's Park ($25/person, $100/team or free to watch). It's is a great way to show off your skills (both beer and bocce). Shoot single, form a four-person team, or just sit back and watch while you listen to live music from the Sanderson Band, the Lowell Daniels Band and the Humboldt Highlanders Pipe Band.