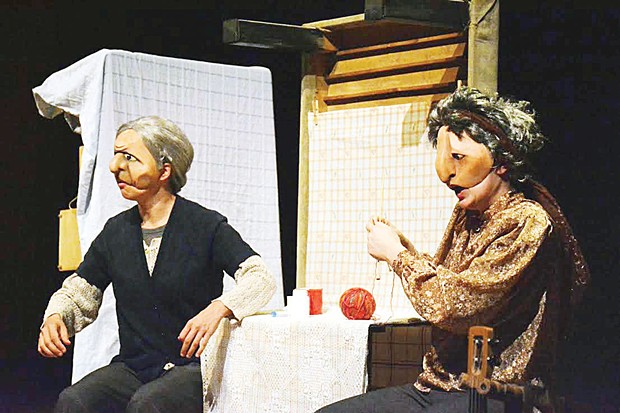 January can be a bit of a desert for entertainment. But this week the Arcata Playhouse saves parched theater fans, hosting the international, award-winning play, A Day in the Desert, showing Jan. 8 at 4 and 8 p.m. and Jan. 9 at 8 p.m. ($20, Playhouse members $15, youth $10). The musical, mime/clown theatrical collaboration of South Africans Jenine Collocott and Nick Warren, and German actress and harpist Barbara Draeger tackles serious issues such as global warming and the loss of the natural world, but does so with inventive playfulness that appeals to kids and adults alike. Arcata native and artist Casey James Mulderig, who has spent the last five years studying, producing and performing in Europe, has teamed with the trio to bring this production to the playhouse.

A Day in the Desert revolves around two friends: Fiona (Collocott), an upright, unadventurous citizen who is afraid to set foot beyond her front door, and her extroverted friend Andromeda (Draeger), who persuades Fiona to join her on an adventure. The two hop an airplane headed for the Kalahari Desert. The production, directed by Vika Dahlberg-Hansen, won an Encore Ovation Award for theater excellence at the Grahamstown National Arts Festival in South Africa when it premiered there in 2013. The show promises "magical realism that takes you from the confines of the inner city to the freedom of outer space and back." And you only need to get to Arcata.