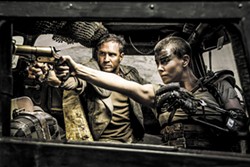 Mad Max: Fury Road, George Miller's gorgeous, long-awaited (20 years in the making) fourth film in the Mad Max franchise, rips across the big screen at the Arcata Theater Lounge on Jan. 15 at 8 p.m. ($5). Tom Hardy and Charlize Theron star as two rebels on the run from a madman in a vast, stark landscape.

At a base level, the film is one long car chase to end all car chases. Its breathtaking action scenes that build upon each other aren't the creation of CGI, but rather the result of brilliant editing and cinematography by pros in the game. And it carries with it some heavy themes, but you'll have to sort those out for yourself when the dust settles.

In case you missed it in the theaters, or you're ready for another lap around the post-apocalyptic track, this is your chance to see it in all its big-screen glory for just a five spot. If all the critical acclaim, grease-smeared Hardy's stubbled jaw or Theron's burning stare aren't enough to get you to the theater, there's always the fact it made John J. Bennett's top 10 films of the year. Drive on.