The One That We Want 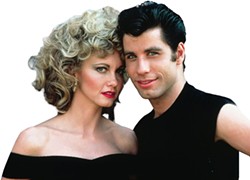 If you're gearing up right now to belt out the next line to "Summer Nights," the infectious he-said-she-said account of high school romance from Grease, you're not alone and you're in for a treat. The 1978 movie adaptation of the musical about a group of high schoolers in the 1950s is playing Friday, May 13 at 8 p.m. the Arcata Theatre Lounge ($5).

Those of us who know every word to every song are making plans to pack the ATL on Friday and bust out some Hopelessly Devoted To You. Imagine it: a giant-screen, electrifying night of movie Karaoke. We got chills. (You know what they're doin'.)

Girls, grab your Pink Ladies jackets, and bros, shine your T-Birds. It's gonna be a night you won't forget.

Tell us about it, stud.