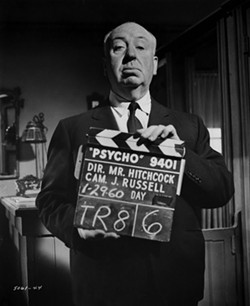 Come in from the August heat for some thrills and chills during the Eureka Theater's Summer of Suspense featuring weekly splashes of ice-cold Alfred Hitchcock movies ($5). You can scratch your itch for Hitch every Friday night at 7:30 p.m. this month with plot twists, tracking shots, poised blondes and a game of Where's Alfred as you scan the screen for his requisite cameos.

We've all got that one charming/shady uncle. On Aug. 5 PMP Wine Club presents Shadow of a Doubt (1943), in which Teresa Wright stars as a young woman trying to figure out if her darling Uncle Charlie is whacking widows for their cash. Seen it? No spoilers in the lobby.

The Journal hosts the dizzying Vertigo (1958) on Aug. 12, with James Stewart as a gumshoe sidelined by fear of heights and obsessed with a dead woman and her doppelganger, played by the iconic Kim Novak.

Since we're greedy, we're sponsoring Rear Window (1954), too. On Aug. 20, come back for more James Stewart, this time as a photojournalist-turned-peeping-Tom who may have witnessed a murder through his zoom lens while laid up with a busted leg. Grace Kelly plays his socialite girlfriend and does the Neighborhood Watch legwork.

Wrap it up on the run with Cary Grant and Eva Marie Saint in the stylish North by Northwest (1959) presented by Carson Park Design on Aug 26. Saint is the ultimate femme fatale, playing playboy Roger Thornhill (Grant), who's mistaken for a spy and swept up in the action.

It's going to be killer.