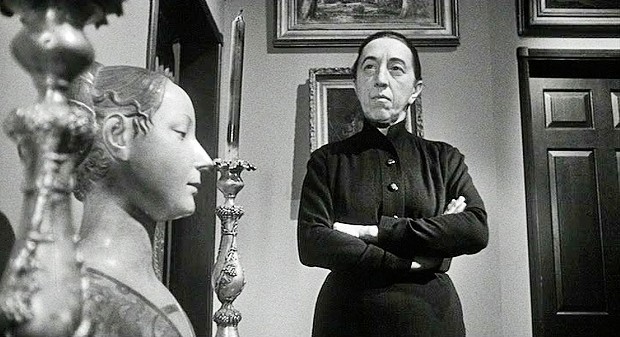 Campy black-and-white horror/sci-fi films of the '50s and '60s provide just a bit of a fright but mostly ghostly good fun. From William Castle, B-movie mogul and pioneer of the horror movie gimmick (House on Haunted Hill with Emergo! and The Tingler with Percepto!), comes 13 Ghosts (1960), a silly fright fest about a displaced family that inherits a spooky mansion, showing at the Arcata Theatre Lounge on Jan. 18 at 6 p.m. (free w/$5 food/bev purchase).

Somewhere in bowels of the mansion is the late uncle's fortune — along with 12 ghosts who need a 13th in order to free them — and a sinister lurker seeking the hidden treasure. The film's gimmick at the time of its release (Illusion-O!) was special ghost-viewing glasses — similar to the uncle's invention in the film. Castle appears in the beginning of film to explain that viewers who believe in ghosts should look through the red lens (the ghosts appeared more vivid) and skeptics should look through the blue lens (ghosts barely visible).

The film has been remastered so that the special ghost viewers aren't needed, and some versions of the film have been edited to remove the distracting USE VIEWER NOW and REMOVE VIEWER NOW text that appears on the screen. Glasses or no, there are plenty of laughable moments in this one. Catch Castle's wink to The Wizard of Oz's Margaret Hamilton (minus green face paint and maniacal cackle), who plays the mansion's housemaid, when young Buck repeatedly refers to someone in the house being a real witch.