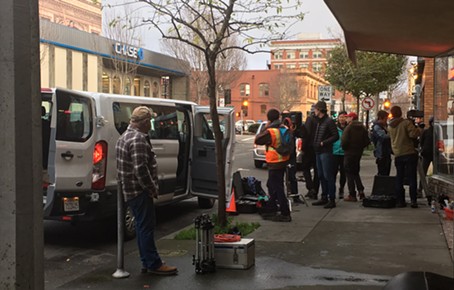 No word yet on when that movie filming in Eureka will be in theaters but An Evening with Beverly Luff Linn, — directed by Jim Hosking and starring Aubrey Plaza, Jemaine Clement, Craig Robinson and Emile Hirsch — is hitting quite a few Humboldt locations with vintage vibes. When we do finally get to see it, keep your eyes peeled for scenes at Gas 4 Less in Arcata, the Eureka Inn lobby, its exterior and one of the hotel's rooms, Roy's Club Italian Restaurant — where filming took place yesterday afternoon — and right outside the Journal's F Street office. The film crew was on the sidewalk around 5 p.m. Thursday shooting a brief scene in a white van, with prop flyers taped to our newspaper box. (It's like we were basically in a movie but we're not signing autographs, so please be cool about it.) Last night, the Cherry Blossom Bakery in Henderson Center was lit up for a shoot, too, during which an unidentified actress reportedly buys a cinnamon roll. (We're also getting a cinnamon roll later, which is basically like brunch with Aubrey Plaza.)