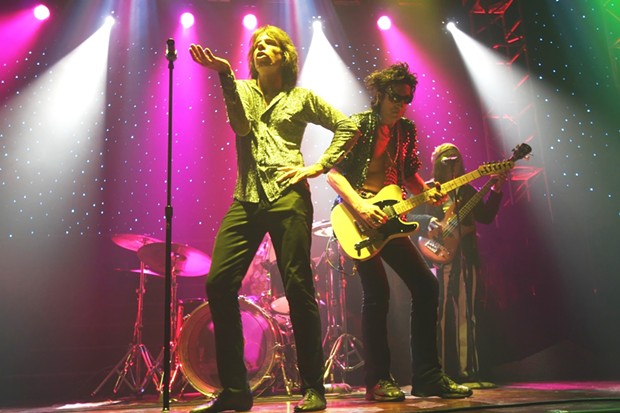 The 142-year-old Holy Trinity Church of Trinidad is having A World of Song Benefit Concert this afternoon to help raise funds to maintain its historic beingness. Former Humboldt State University music instructor Steve Berman — now living in Grants Pass — will be performing on a multitude of instruments such as the oud, hurdy-gurdy, balalaika, charango, pipa, saz and a rather less exotic instrument known as a guitar. He'll perform songs from Ireland, Russia, China, England, Venezuela and Turkey. This show starts at 3 p.m. and reservations are encouraged and can be made by calling 677-3456. A $15 donation is asked to help support this old church and a reception will follow the concert. For something completely different, punk rock is on the bill this evening at the Siren's Song Tavern at 6:30 p.m. Local bands Komatose, Dullahan, Cross Contamination and The ChainLinks are supporting MDC (Millions of Dead Cops), who formed in Austin, Texas, back in 1981. After relocating to San Francisco and then Portland, they play "fast hardcore punk music espousing far-left sociopolitical ideals, with singer Dave Dictor expressing his animal rights, gay rights, transgender rights, pro-racial equality and anti-capitalist convictions." Bring $10 for this show and feel free to wear your political convictions on your sleeve.

Conflict is on the bill tonight (as mentioned above) at the Arcata Theatre Lounge at 7:30 p.m., as the Beatles vs. Stones–A Musical Showdown attempts to answer the big question. Expect alternating "mini sets" by Abbey Road and Satisfaction (I'll let you guess which band is a tribute to which). The bands not only recreate the music that we have known and loved since the 1960s — at times to microscopic detail — but also play the part visually. Depending on how much you're squinting (or how far back you are) you might be persuaded that you're watching Mick strut around the stage, Ringo bobbing his head to the beat or Bill Wyman standing motionless in front of the amps. Abbey Road may have the more challenging time as far as visuals go, representing the changes The Beatles went through from their Ed Sullivan era "Beatle Suits" and mop tops to the Sgt. Pepper psychedelic military uniforms, to the Let it Be era long hair and denim. It might just reinforce your preference for either band or, if you're like me, it'll just be another reminder that you love them both. While this would be a great show to bring the kids to, it's 21+ and $28 gets you in the door.