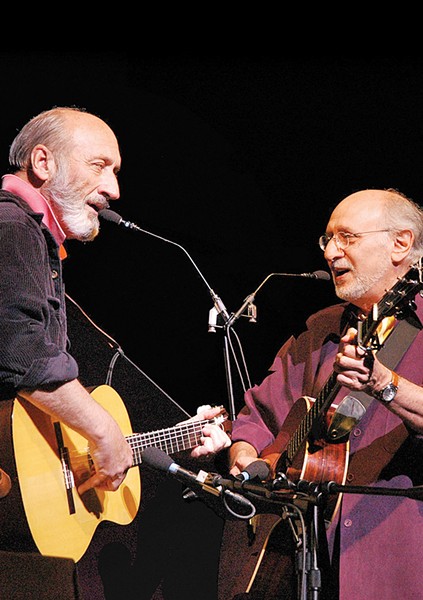 If you dig rock 'n' roll music, had a hammer, or ever wondered where have all the flowers gone, you're probably a fan of the two fellows set to grace the stage this weekend at the Van Duzer Theatre. Peter Yarrow & Noel Paul Stookey, purveyors of protest songs and two-thirds of the iconic folk-music trio Peter, Paul and Mary, take a stroll down memory lane on Sunday, March 12 at 7 p.m., celebrating 50 years of their legacy as America's beloved folk heroes ($66).

One of the most popular groups of the 1960s, Peter, Paul and Mary were part of the folk revival taking place in American music — a time ripe for their message of political activism and hope. Making sweet three-part harmony with their rich-voiced counterpart, the late, great Mary Travers, the group charted a string of hits with covers of the Bob Dylan songs "Blowin in the Wind," "The Times They Are a-Changin" and "Don't Think Twice, It's Alright." They also gave new life to other songs: "If I Had a Hammer," "500 Miles," "Michael (Row the Boat Ashore)," "Leaving on a Jet Plane" and, yes, "Kumbaya." Then there's Yarrow's original tale about childhood imagination and the loss of innocence as adulthood encroaches. You know you've cried to "Puff, the Magic Dragon." And you're not alone.

Make plans to sing along with Peter, Paul and the crowd, and reminisce about the autumn mist (and other fancy stuff). America could use a night with a couple of old friends right now.