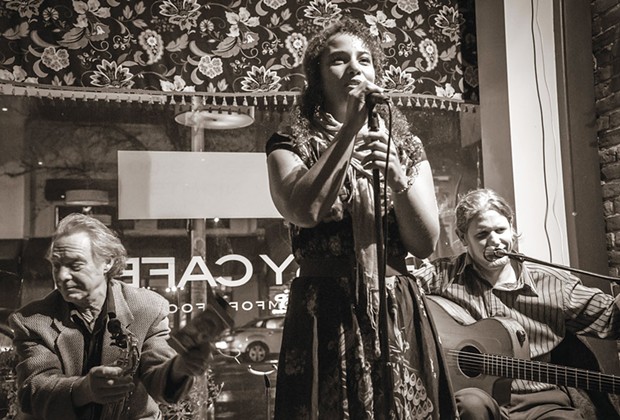 If you're in the mood for French Chanson and Gypsy Jazz, the Westhaven Center for the Arts is the place to be tonight for French Oak Gypsy Band, comprised of North Bay Native Stella Heath, French/American guitarist Gabriel Pirad and reedist James Inciardi. A $5-$20 sliding scale for this show at 7:30 p.m. Another slide guitarist — completely unlike above-mentioned Mr. Log III — brings high energy Mississippi Delta Blues. Grammy-winner Roy Rogers and The Delta Rhythm Kings will be at The Old Steeple at 7:30 p.m. He's worked with John Lee Hooker, Bonnie Raitt and the late great Ray Manazarek of The Doors. Grab your $30 tickets, as it'll fill up. The Sanctuary in Arcata hosts the show Dreams, Visions, and a Few Jokes put on by Mr. Story himself, Jeff DeMark. He's joined by Diana Heberger, Bob Davis, Tim Breed, Charlie Gilbert and string-slinger Marc Jeffares. "Carl Jung will be rolling his eyes in the collective unconscious" but he's on the guest list anyway, Jeff tells me. Stories and music start at 8 p.m. with a $7-$10 sliding scale. Also at 8 p.m. will be Skyline Swing playing some Gypsy jazz for free at Cafe Mokka. A packed bill is at Outer Space at 11th and M streets in Arcata tonight. Allison Crutchfield & The Fizz, Soar and Melrose Place join Vagabon at 8 p.m. for just $8. The debut album Infinite Worlds is a nice trippy mélange of acoustic indie-rock with electronic dollops sprinkled in the background. Deadheads will be flocking to the Arcata Theatre Lounge around 8:30 p.m. to hear The Schwag, whose mission is to carry "on the vibe and music of the legendary Grateful Dead." Good thing these folks are stopping by Arcata, right? They average about 150 shows a year and have been doing their thing for almost 25 years now, so you know they've got their chops. Bring $15 worth of dead presidents to get in the door.