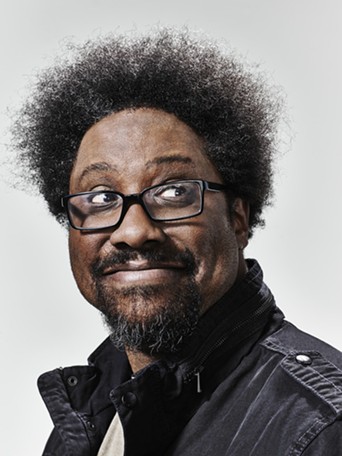 W. Kamau Bell has a big laugh. It’s full and deep over the phone, inviting you to laugh with him — maybe at a joke he just made, maybe at him, maybe at an awkward moment, like hanging out at a white nationalist convention as an African American man. The laugh is part of what keeps even those he disagrees with engaged, taking out the sting of his observations without losing their sharpness. In fact, with his keen insights into race and culture, Bell might be just the friend America needs, listening intently and calling us on our shit. With a smile.

Bell is tackling heavy stuff in the show he brings to the Van Duzer Theatre on Monday night, The Kamau Bell Curve: Ending Racism in About an Hour. An hour. Why not? That he’s planning to do it via PowerPoint is another thing but we’ll get to that.

This trip to Humboldt comes at a pretty busy time in Bell’s career. His critically acclaimed CNN docu-series United Shades of America, in which he crisscrosses the country talking to people from all walks of life about everything from neighborhood gentrification to the Klan, begins its second season at the end of this month. He’s got a book, The Awkward Thoughts of W. Kamau Bell: Tales of a 6' 4", African American, Heterosexual, Cisgender, Left-Leaning, Asthmatic, Black and Proud Blerd, Mama's Boy, Dad, and Stand-Up Comedian, coming out in May and he’s got two podcasts going (Politically Re-Active, with co-host Hari Kondabolu, and Denzel Washington is The Greatest Actor of All Time Period, with co-host Kevin Avery).


But this isn’t the Berkley-based comic’s first time behind the Redwood Curtain — you may have caught his act eight or nine years ago when he used to come up to do standup. “I don’t remember where exactly in Humboldt but it was in a community center and it was one of the gigs that comics always said, 'It's weirdly good.'” That may or may not have had something to do with our neck of the woods being “the home of the heavy handshake.”

OK. So it wasn’t always CNN contracts and book deals. It wasn’t always politics, either. “I think I talked about race a little but I think I had to grow up and get grown-up concerns. You know the only thing better than a 20-year-old comedian is a 30-year-old comedian. … The comics who are heralded as the greatest comics in this country are the people who've been around for a while,” he says. He adds that his mom pulling him into political conversations is part of what helped him find his voice and focus.

“On some level,” he says, “being a comedian is about constantly taking the temperature of the world, your world and the outside world. Every day I 'm learning new things and my kid is saying awesome things and I'm like, 'I'm gonna say that on stage.'”

Of course, these days keeping up with politics is overwhelming. (Seriously, who knows what’s happened since you started reading this?) So Bell has to discern what he takes on and what he lets go. “When you go to sleep at night and you wake up in the morning you have to grab your phone like what happened, what did I miss?” he says. And then there’s the worry that you’re falling prey to sensational sound bytes and deliberate distractions. “There is a game that's being played,” he says. “Especially when Trump was first in office, I was checking every news alert from several different sources. And now I realize a lot of the news that comes out of the White House and the people who are a part of the White House — it’s like [when] your mom keeps texting you. As long as nobody died and nobody needs me, I don’t have to get back to these texts right away. ... I see the alerts come in and I'm like, nope, nobody died, nobody needs me. Keep moving.” There’s that big laugh again. He continues, “And every now and again, you’re like, oh, this is a big one; I'd better weigh in on this or I need to read more about this. This means basically skipping any news alerts that start with ‘Kellyanne Conway.’ Nope, not today Kellyanne,” he says slowly. “Not today.”

The premier episode of the second season of United Shades of America actually takes place at the National Policy Institute — the stomping grounds of floppy-haired white nationalist Richard Spencer.
The episode was shot right after the Trump’s election and the mood was celebratory, with attendees throwing Nazi salutes, to Bell’s astonishment. “You know, I'm in the room,” he says. “I'm in the room with people. Some of them were like, ‘What are you doing here?’ And some of them felt like they'd won so much they'd come up and try to fuck with me.” True to form, Bell kept his cool. “I'd just sort of smile at them and be like, yeah, it’s good, I'm fine. And they'd walk away.” His Buddha-level calm is something he recalls learning from Chris Rock. He says, “You just meet them in a place slightly below their energy.”

“I'm always looking for backup careers,” Bell says, “because any of this could evaporate at any moment." tweet this
The Bell Curve show takes on some of the same issues of race and American society as a one-man show. With PowerPoint. Bell says, “Basically what I’d seen John Stewart do on The Daily Show I wanted to do in a theater.” The resulting mish-mash of YouTube videos, screen grabs and slides is nothing like the usual convention fare.

“I'm always looking for backup careers,” Bell says, “because any of this could evaporate at any moment. I've always said that I have a very solid PowerPoint consulting business. I know that I could really help. Forget ending racism, I could fix a lot of people's power points really quickly.” You can expect his Monday night show to be way more fun you're your last corporate retreat. “Comedy is always a more entertaining place to come from than regional sales,” he says.

Adapting from Stewart’s presentation makes sense given their overlapping interests. Bell notes that mid-century comic Mort Sahl’s act consisted of reading a newspaper on stage and making jokes. “That's john Stewart,” he says. “The delivery system changes but the modern era of stand-up comedy is about personal monologue and satirical attack. Those hallmarks still remain.” He continues, “You can be as personal as Maria Bamford but theres a connection between Maria Bamford and Joan Rivers and Phyllis Diller talking about their lives. Just like there's a connection between Lenny Bruce, Mort Sahl and John Stewart.” He adds in a tiny voice, “And hopefully me!”

So what does he think of the backlash against Dave Chappelle’s transphobic jokes in his most recent special? Bell nearly whispers, “I would never do those bits, or more importantly, I wouldn’t use those words. … Having said that, Dave Chappelle is still one of the greatest stand-up comedians of all time. So it’s this weird thing.” He says he gets why people are upset about the anti-trans material. If a friend was saying something similar, he says, “I’d be like, 'Stop doing that.' … So I see that and I go, ‘Oh no, don’t say that, don’t say that.” But he’s not sure that kind of advice would touch Chappelle. “He lives in his own world in Ohio and he lives in his own altitude … I don’t know that he’ll ever know what people are saying or thinking about it.” Mostly he’s curious about the next special and whether or not it will be informed by the conversation around this one.

Bell recalls something he’s heard Chris Rock talk about recently, that the audience in Chappelle’s Netflix special is applauding. How might the jokes draw the next audience? Maybe they’ll come for more trans bashing — how will Chappelle feel about that? “When you look at Sam Kinison’s career, he sort of got pulled out by his own audience. Like something that starts out looking in some way progressive or forward thinking, when it’s supported by the wrong people, the context changes and it comes off in a very different way.”

Bell also points out that, despite cries to the contrary, censorship is not a thing. “People can still say whatever you want to say, it's just a question of can you deal with the consequences of saying whatever you want to say.” For Bell, a comedian’s responsibility is to his or her audience “and their employer,” he adds, laughing again. “There's times I'll say something and go, ‘Whoops, nope. Never mind. Scratch that.’ But part of being a comic is walking that line at the edge. Everybody decides they wanted to become a comedian because there was a voice in their head that said ‘You shouldn't say that thing you're thinking,’ and they were like, ‘I think I'm gonna say it anyway.’” He chuckles for a moment before adding, “If you do ultimately please everybody, you’re probably not very funny.”

And hey, if that ever happens, he's always got PowerPoint to fall back on.