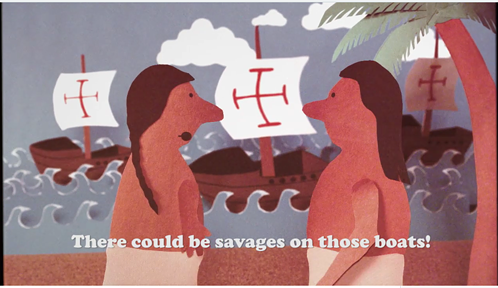 When Kiowa-Choctaw artist Steven Paul Judd was a child, growing up on Indian reservations in Oklahoma and Mississippi, he contracted polio and had to go to the hospital. There, by his own account, he “saw TV for the first time.” It made a big impression.

As luck would have it, the TV movie that was playing happened to be The Wizard of Oz. Specifically, it was the scene where Dorothy steps out of monochrome Kansas and into the technicolor splendor of Oz. To hear Judd tell it, having this be your first-ever experience of television was a hyper-accelerated transition from black-and-white moving images into color that basically recapitulated the whole 20th century development of the moving-picture medium in a matter of dizzying minutes. This was an epiphanic exposure — a baptism into TV by fire that left the artist’s world view illuminated and rearranged.

Judd told this story to a packed house at Humboldt State University on Wednesday during a talk he gave as part of HSU’s Native Pathways speaker series. Judd, who lives in Oklahoma and Los Angeles, is a screenwriter, artist and independent filmmaker; he has also recently co-written a novel. His videos tell short, funny stories set in native families and communities, both on and off the reservation. The stories he wants to tell have the simplicity and clarity of folktales, with the reference points updated for contemporary audiences.

The rapid initiation into TV described above seems to have prompted a series of questions: What did it mean to be Indian and be immersed in pop culture? What did it mean to be Kiowa and Choctaw and also be a diehard fan of all things having to do with superheroes and science fiction? These queries continue to propel the artist’s investigations.

In his talk, Judd explained that he hadn’t seen a lot of Indians on TV while he was growing up. In fact, he recalled exactly three. There was Iron Eyes Cody, famous from a 1971 anti-littering PSA, who let a single tear fall from his eye when he gazed upon the white man’s litterbug ways (and who was actually Sicilian). There was Jay Silverheels, who played Tonto in The Lone Ranger. And then there was Erik Estrada, from the 1977-83 series CHiPs. While Estrada is not actually Native either, Judd said he was willing to accord the actor who played Officer Frank “Ponch” Poncharello honorary status: “He’s not a Native person, but I thought he looked like one of my uncles, who watched CHiPs too.”

All of these Indian role models, Judd explained, had their merits, but when it came to authenticity they lacked a certain je ne sais quoi. He decided to start shooting videos, making photo collages and writing screenplays in order to make the Native characters he wanted to see appear onscreen.
His photo collages feature mash-up images created by juxtaposing historical photographs of Indians from the late 19th and early 20th century with anachronistic characters from late 20th century movies and TV. In one still, the Stay-Puft Marshmallow Man looms alarmingly behind a row of teepees decorated with traditional paintings. A replica “ledger drawing” made in homage to the narrative line drawings created by Plains Indians from the 1860s through the 1920s features warrior figures whose regalia owes more to the Teenage Mutant Ninja Turtles than it does to traditional indigenous forms.


Many of the videos involve stop-action animation. In “Round Dance” an artist’s articulated wooden model and a robot call forth assorted action figures that drum and form a moving circle, each toy prompting separate pangs of pop culture deja vu. Ewoks and Storm Troopers stomp through the frame. The command to “be a good Indian” echoes through space, followed by a polite request to turn your phone off.

You can see more of Judd’s videos, including “First Contact,” “Neil Discovers the Moon” and “Search for the World’s Best Indian Taco,” here.