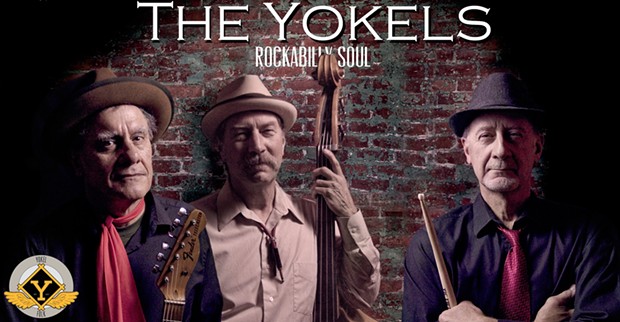 Local guitar-slingin' troubadour Chuck Mayville returns to Gallagher's Irish Pub in Eureka tonight around 6 p.m. He'll play a variety of rock standards and may even take a few requests if you throw some tips into the mix. Just don't request any REO Speedwagon or Supertramp. Or do. Just tip big. Orick-based classic-country band the Redwood Ramblers are at the Mad River Brewery Tap room at the same time and also for free. The Arcata Playhouse tonight hosts a benefit for, well, the Arcata Playhouse, as holding it anywhere else would be kind of weird. The press release states that it's a "hybrid sit-down and dance concert with an open floor and cabaret seating." Starting off this benefit are The Yokels, with Steve Irwin, Glen Nagy and Bill Kerker. These fellas have all been playing together in one form or another since 1977 so they're locked in the groove. They'll take the stage around 8 p.m. Following them up will be fellow supergroup, The Detours doing their Americana gig. You've probably seen all these musicians in other groups as well, but their current lineup is Paul DeMark, Marc Jeffares, Rick Levin, Ron Sharp and Jake Wiegandt. No word at the moment on the ticket price but these two bands can command a lot, so whatever it turns out to be, consider it a deal and a steal. Dead heads can rejoice that Melvin Seals and JGB return to Humboldt for another two-night stand at Humboldt Brews in Arcata. Catch the first gig at 9:30 p.m. — $30 will get you in the door for these jams. I got word that local rock band the Sleepwalkerz will be playing at Blondie's in Arcata tonight. Without an official statement, I'm going to guess that music will start somewhere around 9 p.m. or 9:30 p.m. and probably for free with a slight chance of a $5 cover charge.