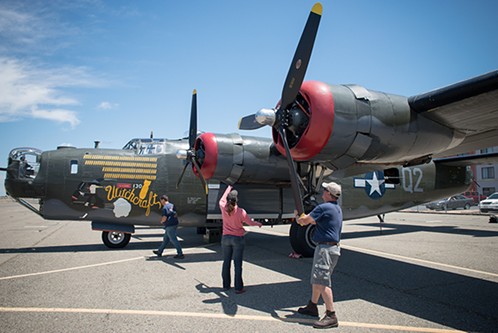 As its four engines rev up, the Nine O Nine, a Boeing B-17 Flying Fortress, blows a plume of black smoke across the tarmac at Buchanan Field Airport in Concord. During World War II, hardy B-17s — stories abound of the planes landing with blown out engines and destroyed stabilizers — were heavily deployed but this one never saw action, coming off the factory line as the war came to a close. Still, before the Collings Foundation bought and restored the plane, renaming it in honor of the original Nine O Nine and her crew, this vintage flyer did her bit in military transport and rescue operations (not to mention as a nuclear fallout test subject), as well as some forest fire fighting. These days, she's more of a showpiece.


With a handful of donors and volunteers strapped in, the Army bomber was the first to depart for Humboldt on Monday. The Collings Foundation and the North Coast Vintage Aviation Association partnered to bring the planes to Humboldt County through Wednesday as part of its annual Wings of Freedom Tour, during which visitors can view, explore and, for a pretty penny ($400-$3,200), take a spin in the historic war planes. Also making the journey north were a gleaming two-seat P-51 Mustang and a B-25 Mitchell named the Tondelayo, which is painted with a grass-skirted pin-up girl. Then there is The Witchcraft, a B-24 Liberator that saw plenty of combat and is the last of its kind to fly. This was the plane the Journal, along with photographer Mark McKenna, boarded for the flight to McKinleyville. 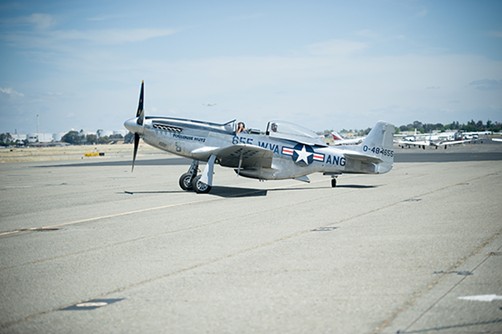 At one point during the war, a Liberator rolled out of the factory every 100 minutes, according to the Smithsonian's Air and Space. While their long-range flying capability and heavy payloads were essential in taking out Germany's fuel stores in Romania, crippling its ground forces, there was little use for them after the war. This particular B-24 flew with Britain's Royal Air Force, after which it wound up in India and back again in England before the Collings Foundation got hold of it. Its restoration was a mammoth five-year project, after which it was renamed in honor of the original Witchcraft, its riveted patchwork skin tattooed with 130 yellow bombs on its side — one for each mission completed without a man injured. The names of donors are inscribed on the plane, too, and the bomb bay doors are marked with the names of Honor Crew members — veterans and their children — and the planes they crewed: Paper Doll, Flak Magnet, Satan's Little Sister, Never Mrs., Hell's Belle, Ramp Rats, Pistol Packin' Mama, Strawberry Bitch. 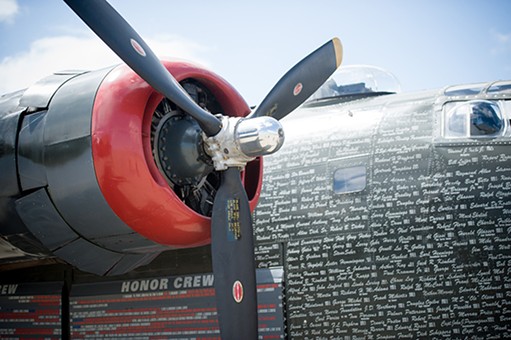 Chef "Grizzly" Adams runs the ground crew and caters for the crew. A professional caterer and Navy vet, he says he volunteers with the Collings Foundation as a way to continue his service and honor veterans. He also loves the planes. Asked why some of the names of planes don't seem to be attached to a crew member, Adams says some people don't want to put their own names out there, instead opting to commemorate their crews, "the people you work with every day." Not everyone wants glory, he says. "There's something we call just doing the job, you know?"

Boarding means climbing up from the open belly of the plane, past dummy bombs and onto the narrow plank that runs through its middle. You can see daylight through the seams of the forward bomb bay doors on either side, where a pair of small signs read, "No Step." Flight engineer Gary Dunn warns us that they aren't designed to hold weight and we'll fall straight through if we step down from the roughly 10-inch-wide plank. Dunn tells us not to "touch anything red," and that bells will alert us to takeoff and landing, adding, "If you see the ground getting farther and farther away, that probably means we're in the air."

The top turret, a glass bubble with protruding guns, is overhead as we climb up behind the cockpit where chief pilot Rob "Pinky" Pinksten and co-pilot Roxanne Parker are readying for takeoff. Dunn grabs a small wooden step stool and wedges himself behind and between them to monitor the instruments for the duration of the flight. The crew looks young against all the chipped paint, faded dials and fraying nylon lines, and it's bracing to remember most U.S. and British pilots were in their early 20s in the 1940s. The Liberator has a reputation for being tricky to fly. "It's unstable," Dunn says. "You can feel when somebody moves from the front to the back." Since it lacks some of the self-correction other planes have, a pilot has to hold on and steady it manually. We buckle into canvas seats on the floor and the engines kick on with a roar you feel in your chest and your teeth. 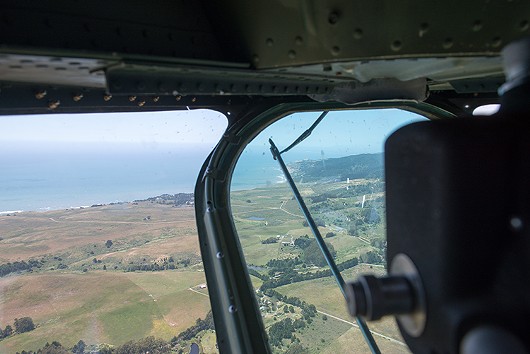 Once we reach altitude, we can move around the rabbit warren of compartments, holding onto whatever isn't painted red. Getting to the bombardier's seat under the cockpit means crawling on hands and knees across a wooden plank and scooting into a narrow seat for a view of the the ground below. It's not for the faint of heart and the thin, bent wiper blade on the main window doesn't inspire confidence for visibility in rough weather. Crawling back out and crossing the catwalk takes you to the waist guns at the middle of the aircraft. Air rushes through a pair of open hatches for the long, swivel-mounted machine guns. Look past them and it's beautiful: a wide view of the Pacific on one side and rolling hills on the other, with no glass in the way. Scan back to the guns, the fat, yellow oxygen tanks mounted overhead and the ammunition boxes fastened to the wall, and you realize how exposed you are.

There's another turret on the tail (marked "Cookie" outside), and if you're small enough and can hoist yourself up and into the shoulder-wide space, you can slip your fingers on the dual triggers for the two rear guns, thumbs hooked into brass rings. To one side there is a plug for the gunner's electric suit, and no wonder — nothing is sealed or insulated and it must have been brutally cold in a European winter. If you reach to the side of the turret, you can put your hand right outside the plane on the other side of the glass. Hanging off the back of the plane in what amounts to a metal-mounted snow globe some 30,000 feet in the air, that safety record of 130 successful missions seems impossible. 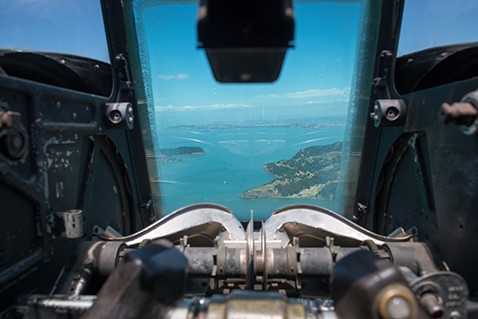 As we fly over San Francisco, the Golden Gate Bridge recedes and passes through the gun sights. The plane feels totally incongruous with the landscape, an instrument of war against a postcard backdrop. And it's strange to come to it like a tourist, this hulking, windblown metal box in which very young men hunkered, scanned charts, dropped bombs, shot at other planes and were afraid. When we land, the wheels squeal heavily. Since there's no view from where we're sitting, it's not until we scramble back down through the bay doors that we realize there's a crowd. All four planes are parked showroom style, with families and veterans in commemorative hats and jackets strolling between them. And from the outside, with the sun on them, the planes look like new. 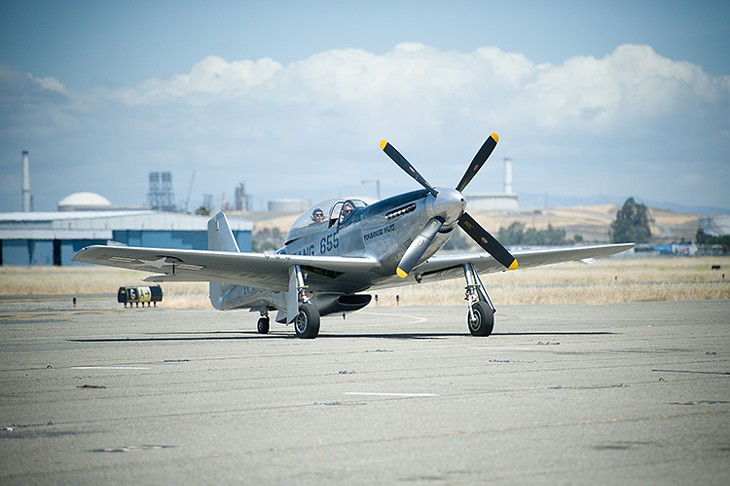 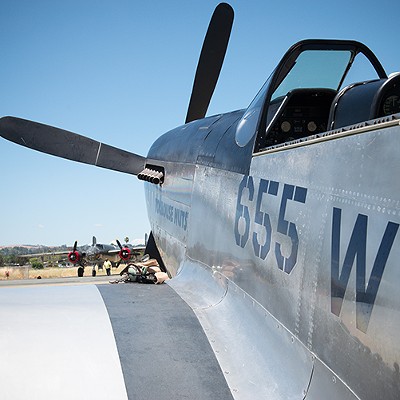 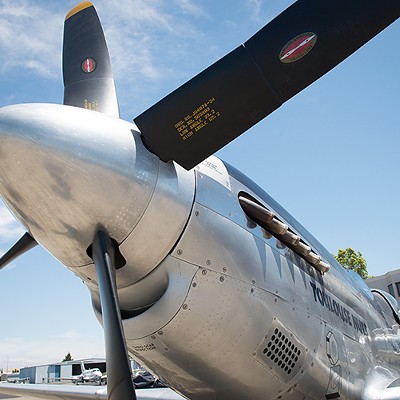 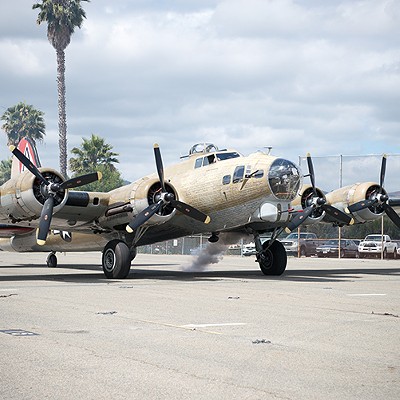 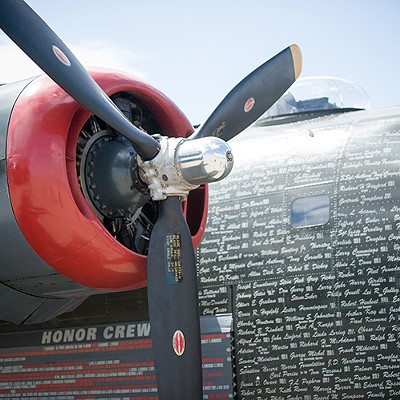 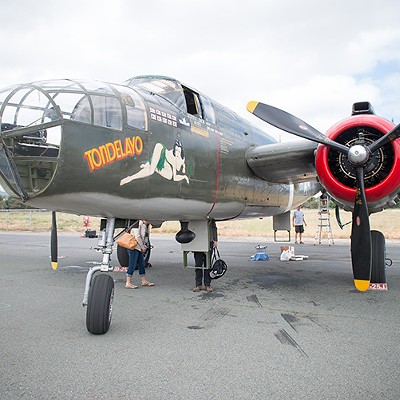 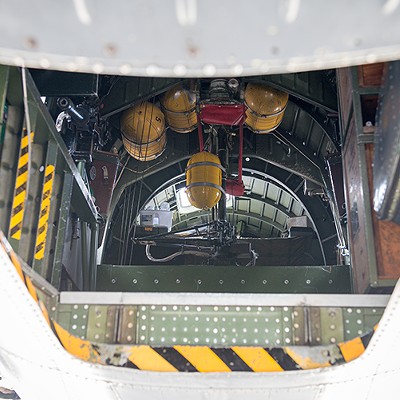