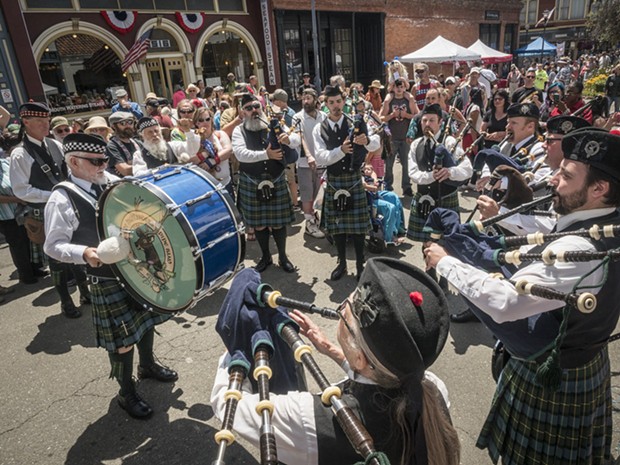 It's Oyster Fest today, so come up with a game plan in your head before getting silly day-drunk and making a total ass of yourself. If you want to frontload it pretty hard while the sun's out, who am I to judge? Just have a plan to get home safely and try not to be that person keeping the party/drinking going when the non-daylight shows kick off. Belligerent drunks with sunburns and bellies full of raw oysters at 6 p.m. isn't most bands' target audience. Let's be fair and just pick two out of the three. With those warnings issued, there's nothing like bagpipe music to make you think you can throw a few more down the hatch. The Humboldt Highlanders make a rare appearance at the Mad River Brewery at 6 p.m. and for free. If a piper goes down, it's probably due to dehydration. Buy a John Barleycorn to help him or her back up on their feet. I'm surprised more of these shows haven't been billed "Oyster Fest After-party," and as we know, every void needs to be filled. So with that, let's call this the official unofficial Oyster Fest After-party (as there is no elevation change from the Plaza): Diggin' Dirt and fellow locals Object Heavy are throwing the grooves down at Humboldt Brews tonight at 9 p.m. and for only $10. A little out of walking distance from the fest, local rockers the Sleepwalkerz are having a CD release show at Six Rivers Brewery at the top of the hill in McKinleyville at 9 p.m. It's a free show, but grab a copy of their new album if you like their tunes.