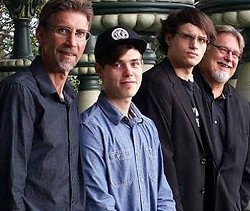 Jenni & David and the Sweet Soul Band bring their funky blues to the Mad River Brewery at 6 p.m. and for free. I'm a Blue Laker, and can vouch for the ability to hit the river, soak up the sun, dry off and head to the brewery for a cold one and some food and music, all while the sun's still up. The sun's been setting around 8:45 p.m. a lot of these nights, so there's plenty of time to get your vitamin D and then vitamin Beer fill. If the river and sun sound like too much effort for you Arcatans, not to sweat, Blase and The Stellar Jays are at Redwood Curtain Brewing Co. at 8 p.m. and also playing for free. Trinidad's Cher-Ae-Heights Casino hosts double father-and-son duo Doug Fir and the 2x4s at 9 p.m. The show is free, but feel free to show the band your appreciation by clapping after songs. That's when you smack your two hands together to make sound. Stomp your feet or jiggle your keys if you don't want to put the beer down. The Wave Lounge in the Blue Lake Casino has swing and jump blues from locals The Uptown Kings happening at the same time and for the same price. Back in Arcata, string band The Rumpke Mountain Boys are stopping by Humboldt Brews at 9:30 p.m. Out of Cincinnati, these fellas are proud of the "trashgrass" moniker they've earned and all four band members are songwriters. They tend not to put together setlists ahead of shows, and instead flow and improvise depending how they and the crowd are feeling that night. They put out their album High Time, Low Tide last year and will most likely have some copies around if you dig their sound. $10 gets you in the Hum Brews doors.