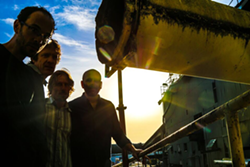 Swinging jazz tunes are on the bill up in Blue Lake when Lizzy and the Moonbeams stop by the Mad River Brewery at 6 p.m. Get your dance partner out there and feel free to tip the band during this free show. Former Eureka-based rock band Blood Orphans — now based out of Olympia, Washington — return to Humboldt with fellow Olympia-ites First Boyfriend, who are stopping by Outer Space in Arcata at 7 p.m. for an all-ages show for only $5. They’re joined by local Philip Dekat, who falls somewhere in the emo vein. An hour later, high priestesses of harmony Belles of the Levee appear at Cafe Mokka at 8 p.m. for a free, all-ages performance. At the same time, a Sacramento band that’s been playing for as long as I’ve been gigging up here is at The Miniplex in Arcata. Quirky creative pop-rockers Be Brave Bold Robot, unrelated to the random red graffiti that would pop up all over Arcata about 10 years ago, will be joining locals the Absynth Quartet for $5 tonight. Come prepared as this will all be electric music for the pre-frontal cortex tonight. Also at 8 p.m. will be local funksters Object Heavy, laying it down at Redwood Curtain Brewery and for free. Buy ’em a beer or leave ’em some cash for their service. The Jam is hosting “Oakland-based neo-soul fusion act” The Seshen in its first Arcata performance tonight at 9 p.m. with local band The Velvet Touch.