The Painting on the Wall

The lift parked in the alley behind the DePaul Building is down low enough for Duncan Jago to chat. The Bristol artist's black pants are spattered with the same pink, lavender and aqua paints he and assistant Joe Murdter have been putting up on the building's south wall, just across the street from the mural Dan Kitchener, another U.K. artist, put up a few weeks ago.

"Monet in space" is the simplest way he can describe the impressionistic mural that will feature "abstracted figures moving through space." He's not ready to share its title yet and is mostly focused on meeting his fast approaching deadline of Saturday, especially since he's got a flight home to catch this weekend. The piece, which covers the building's entire side, is set for completion in only five days — half the time of Kitchener's "Electric City." But he's not terribly worried, despite the "Worriers" T-shirt he's sporting. On Tuesday Jago and Murdter prepped the surface, sealed off the windows and laid down the base. "Today is just knitting it together," says Jago. 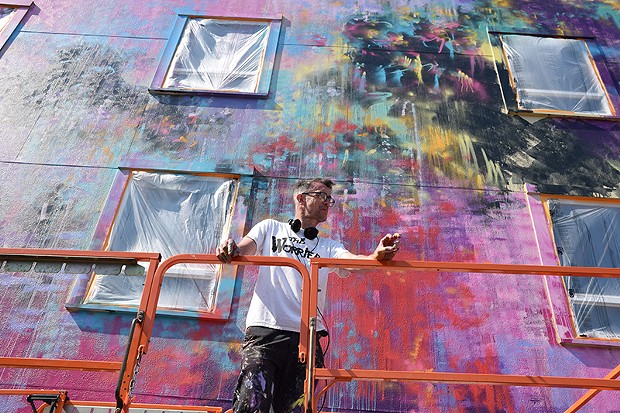 Jago typically works in oil on canvas, though some of his pieces can be as large as 12 feet across. "Painting bigger and bigger is more fun," he says. "You can play around." This will be his largest work, more than double the size of the mural he finished in January in Hawaii, another humid location with sea air that can be tough on outdoor art. That one, he says, is holding up fine. He's using latex exterior paint and spray paint, as well as a palette that should stand up to the sun. He's gotten a chance to check out the other work around town and says he admires Duane Flatmo's trompe l'oeil mural on the Arkley Center for the Performing Arts.

The project is the second mural organized by Black Faun Gallery owner Kevin Bourque, who hopes to further establish Eureka as an arts destination and possibly even put together a mural festival. Gallery manager Claire Reynolds says that while there has been some negative online response to the first mural, the vast majority of the feedback has been positive. "People seem really excited; we see people taking pictures of the mural every day, she says with a smile, adding, "It's OK if it's not their taste ... it's nice to see people looking at art."

Jago, too, has gotten wind of some of the controversy. Asked if he thinks some people will scoff at his nontraditional mural, he pushes his glasses back and grins from the lift. "Yes ... but I'll be gone."