Franti Brings the Fire Even As Nihilism Beckons 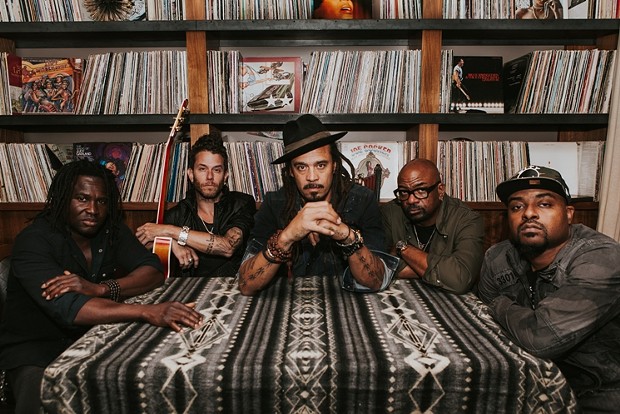 Michael Franti is enjoying the blessings in between tragedies. When we spoke to the singer-songwriter on Monday, Sept. 11, a forest fire near Missoula Montana had led to some cancelled dates on his current tour with band Spearhead, allowing an unexpected two days at home in San Francisco with his wife and family. His oldest son Ade is about to go off to his first year at university; Sept. 12 was his wedding anniversary with wife Sara Agah. The date of our interview, he says, is auspicious.

Franti and Spearhead’s breakout album, Stay Human, was released in 2000 and introduced many in his burgeoning fan base to social justice issues such as mass incarceration and the human cost of globalization. A year later the Twin Towers fell and the stakes of the conversation Franti has been having with his audience – about human rights and human dignity – grew even higher. In the decade and a half that has passed, the singer-songwriter has released six albums, many inspired by his visits to places impacted by war, including Iraq, Afghanistan, Israel, the West Bank and the Gaza Strip. Lyrics from his song “Bomb the World,” “You can bomb the world to pieces/ but you can't bomb it into peace," written as the wars in the Middle East escalated, became an anthem for many in the pro-peace movement. Which leads to the only question you can ask someone who has spent his entire adult life championing peace and harmony even as international politics devolves into even greater discord and instability: Isn’t it exhausting?

“It has been,” Franti agrees. “Especially in the last nine months or whatever, because it has surpassed the craziness of the previous 12 years. It’s just insane. I wake up one day and there’s a ban on transgender [military] people, the next day there’s a white supremacist rally implicitly supported by our president, hurricane, then another hurricane. It’s just non-stop. I never imagined with all the work we’ve done on civil rights in our country, after all we’d been through, we’d be here today.”

Reacting to the latest announcement from Washington, D.C., that President Donald J. Trump was calling for the repeal of the so-called Dreamer’s Act, which created a path for citizenship and amnesty for children brought to the United States from other countries, Franti recalled his youth attending school with the children of migrant workers. “Mind you, [immigrants] are doing the backbreaking work every day to bring food to our tables without so much as a thank you,” he says. “I grew up with kids in my classroom who were migrant workers. I grew up playing with those kids. Those kids would leave December, January, come back in March, following the work. The fact that their children now are still trying to gain access to a path to freedom is just insane.”

But Franti says he remains hopeful. Part of that is his strong relationship with Agah, with whom he says he shares the same values. Franti and Spearhead’s latest album SOULROCKER includes a tribute to Agah, “Crazy For You,” about the stabilizing effect of a good partner in a world that constantly challenges your ideals. He and Agah talk often about how important to challenge yourself to “get to your growing edge.”

Franti also believes that ongoing attention to social justice is having an effect. “I’m more passionate today than I have been,” he says. “I’m more optimistic than I have been. I see more people who are ‘woke,’ more observant than they have been. I remember working on events, have a couple thousand people show up. At the [San Francisco] Women’s March we had 50,000 people. I think music is a way for people to keep the fuel burning. When people get down and feel frustrated, they know they’re not alone.”

Franti and Spearhead will be rolling up to Arcata on their biodiesel-powered bus Sunday night, playing what will no doubt be a sold-out show at the Van Duzer Theatre (when we checked the ticket office this Thursday afternoon, tickets were almost gone.) Franti, a perennial beloved to the Humboldt stage, has equally fond memories of his time here. “When I was a kid, my family would go along the coast, go to the Samoa Cookhouse and have giant pancakes, go to Agate Beach,” he says. “We’d keep driving, go through the redwoods, stop at different places.”

Along with the nature and cuisine (Franti, now a vegan, will probably not be getting those same pancakes, but welcomes your restaurant suggestions) the singer-songwriter says he appreciates Humboldt’s unique spirit. “There’s a spirit of independence there that’s not isolationist,” he says. “You be part of an independent community that cares.” High praise, Humboldt. See you in the aisles Sunday night.