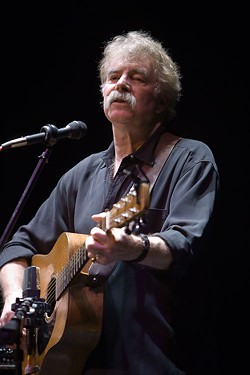 The Old Steeple in Ferndale welcomes back Tom Rush to its 115-year-old venue. Tom has been in the folk world since the '60s and has influenced countless musicians over the decades. Of Rush, James Taylor said, "Tom was not only one of my early heroes, but also one of my main influences." Garth Brooks, Jackson Browne and Joni Mitchell are just a few others who have had their careers influenced by Tom as well. He'll be stopping by the steeple at 7:30 p.m. with his guitar and plenty of stories to tell. Tickets are $45. Back at the Arcata Playhouse, "indie-acoustic soul, roots and folk power duo" Benyaro shares songs via guitars, upright bass, percussion instruments and harmonicas, among others. They welcome local trio No Pardon, who open up this 8 p.m. $15 show.