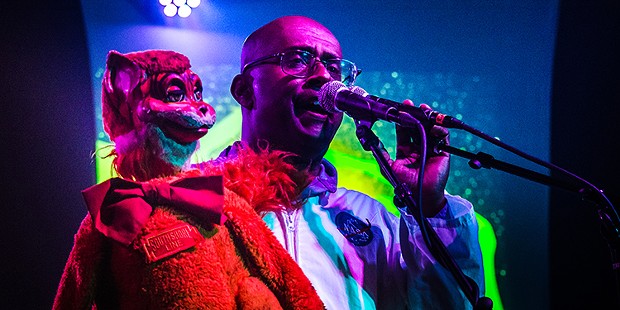 Oh boy, he's back. Puppeteer, singer, storyteller, "alien abductee" and Adult Swim channel gadfly David Liebe Hart will be at the Miniplex for a night of multimedia music, comedy and A.I.-uncanny-valley-type weird behavior to support his new album Space Ranger. Years ago I saw his show in New Orleans and had a blast talking to him afterward, during which time he asked me to buy him two root beers (I did) and drew what I can only describe as the least lifelike/most puppet-like drawing of my girlfriend while telling me about space aliens in Hollywood. Backing musician Th' Mole provides sounds to David's visions and local wizardcore master-blaster comedian Dr. Foxmeat opens with a stand-up set at 9 p.m. ($10 in advance, $15 at the door).

Across town and steeper in price, the Van Duzer Theater is hosting internationally acclaimed songwriter, violinist, whistler and all-around fantastic performer Andrew Bird at 7 p.m. ($46, $22 students). This one will likely sell out, for Mr. Bird's broad appeal might be the only thing about him that can outsize his considerable talent.