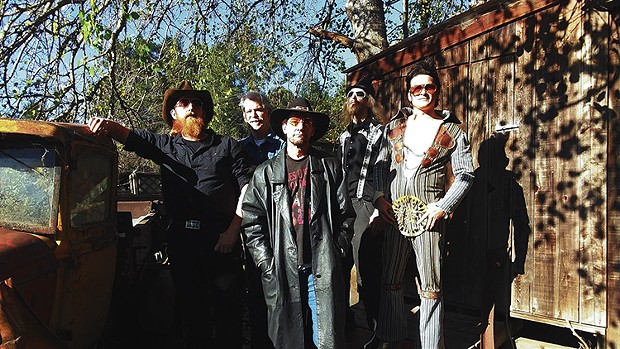 Well, it's here. The terminal point of a long and needlessly exhausting year of trials, travails and — hopefully — a few triumphs. Here's hoping that 2017 will be remembered as America's Empire Strikes Back year and that 2018 will bring a much-needed balance to the tailspin we are in now.

I have tried to find a little something for everyone tonight, so let's start off with the kid and friend family event. Redwood Raks Dance Studio has a dance party with two rooms, two DJs and a Martinelli's apple cider toast at the appointed hour. If you or your loved ones can't dance, fear not: Admission comes with a dance lesson starting promptly at 8 p.m. $12.

The Logger Bar hosts Psychdelvis and The Rounders, an Elvis Presley and David Bowie mash-up cover band which is also known to jam, jam, jam. Ground Control to Major Tom Parker. The music starts at 9 p.m. and we all probably know around when it will reach the crescendo. Free.

Meanwhile, at the same time on 10th Street, Humbrews kicks off a different sort of jam when local funksters Object Heavy team up with Absynth Quartet to drag you dancing and screaming into the new dawn.

For those who like bass-heavy electronic dance music or just prefer to go deaf first in the 20-250 hz frequencies, The Arcata Theatre Lounge has you covered tonight. At 9:30 p.m. the New Year's Eve Galaxy show starts with back to back sets by Onhell and Zanapod, Hypha and Rhizae, Avi8trix and Jason Burruss and a set by Danny Corn as well. Get deep down with future trap bass digging machines. $20.

If you want to be a star or watch other people star in their own celebration of Saturnalian excess, The Miniplex has a special night of Karaoke around 9-ish. Tonight's Dare-oke-a thing they do where the KJ picks the song for a brave member of the audience- will have the theme, "The future and new beginnings," so bear that in mind. I for one hope that a favorite karaoke tune of mine will make the list, "War Pigs" by Black Sabbath. Not because I wish for war, dear readers, but rather because I would like to see the part of the lyrics where God condemns all the politicians, generals and military industrialists to an eternity in Hell come true in 2018. Hosanna. Free with a two-drink minimum.