The World is Shrinking: An interview with Ladysmith Black Mambazo's Albert Mazibuko 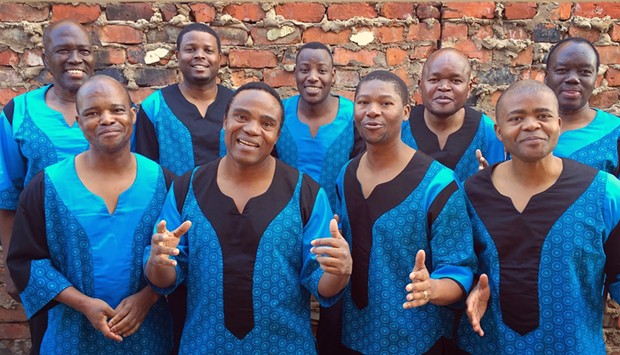 Iconic South African a cappella group Ladysmith Black Mambazo comes to Humboldt State University's Van Duzer Theatre on Thursday, Jan. 25. Setlist columnist Collin Yeo interviewed longtime member of the group Albert Mazibuko via email about the evolution of the group and its mission in the world.

NCJ: Your cousin Joseph retired from touring in 2014, leaving you as the only original member of the group still touring. How has Ladysmith Black Mambazo changed over the years and what is its future?

Mazibuko: It is true that Joseph has retired after performing and traveling for over 50 years. It was his mission in life to create something important with Ladysmith Black Mambazo. Something that would go beyond his involvement. In the 1960's Joseph tried many members before he felt he had found the right group of singers in 1969. I was fortunate to be one of those singers. A few years later my brother Abednego joined the group and continues to sing with us, as well. After the success of Graceland with Paul Simon, several members retired and one passed away. This was 1993 and Joseph had four sons that he had been teaching for many years. Joseph knew early on that he wanted his family singing with him. In the early years it was brothers and cousins. Now it became children. His sons joined then and now, 25 years later, they lead the group. They will carry on their father's mission long into the future. I would say the past 10 years, watching Joseph move away from the group leadership and seeing his sons take the lead, has been one of the best times for us. The group is strong in their commitment to Joseph's dream. Many people don't realize that the current group membership is mostly 25 years or longer in their involvement.


NCJ: Is there a song you love to perform above all others?

Mazibuko: Many of our songs have special memories and I enjoy singing them for those memories. One song is called "Nomathemba." It dates back to the early 1970's when Ladysmith Black Mambazo first started becoming known in South Africa. Still, to this day, when we sing this song on stage, I remember the faces and reactions of the audience from many years ago when we first sang this song. That history repeats for me every time I sing it. I love that feeling. I also love singing the song "Long Walk To Freedom," which honors the late, great Nelson Mandela. People have a beautiful reaction to this song and I get chills seeing the people react as we sing it.

NCJ: What did performing for the first time feel like?

Mazibuko: Well, it was a bit chaotic the very first few times. Joseph was very intent on everyone singing exactly as he wanted and we weren't quite there yet. It was difficult reaching for the level he needed. We worked so hard at it but it took time. Joseph was writing all of our songs and would teach us. I truly did not think we could achieve what he wanted but he knew we could. He knew if we dedicated ourselves to wanting to succeed that we would reach our goal. It seems we did.

NCJ: What are some of the changes worldwide you have noticed in the 50-plus years that the group has been around?

Mazibuko: What we notice is the world is shrinking. The distance between people communicating is so small. People can connect with each other in so many ways now. This so wonderful and it is how we will overcome our many problems. People will find out the truth about what is right and what is wrong. Getting everyone's minds out of the darkness is happening. This gives us tremendous hope.

NCJ: Do you have a performance that stands out in your memory as particularly special?

Mazibuko: After Nelson Mandela was released from prison and began reconciliation in South Africa, he was awarded the Nobel Peace Prize in 1993. He asked us to join him on his trip to Oslo to receive the award. We performed at this ceremony. It was the most amazing moment in time for us. Truly a lifetime honor to be part of that experience.

NCJ: What do you see as the purpose of music?

Mazibuko: For us, the purpose of our music is to help heal and to give hope. We learned this in South Africa during apartheid. We did not feel our singing should be about anger and protest. We wanted to sing about love and about people coming together to make the world a better place. This has been and will always be our mission. People come to us after our concerts and tell us how filled they are with love from our songs. They leave feeling a close bond with others and it seems they will use that force in their day to day lives. If this does happen, then our mission is working.

NCJ: Do you have any thoughts you would like to share with the people of Humboldt County?

Mazibuko: Just that we hope they join us for our concert. We promise a night of beautiful South African music and thrilling traditional dancing. Maybe they will connect with something else we bring to our shows. We hope so. Ngiyabonga! Thank you!