Bigfoot on the Big Screen 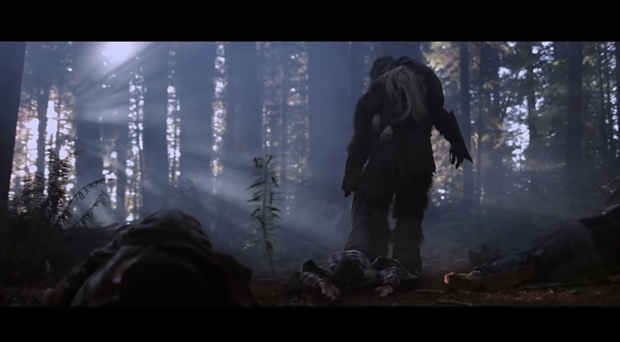 If you saw a film crew, a hairy suit and a lot of bare abs in the woods between 2015 and 2016, it may have been the cast and crew of Primal Rage, a Hollywood feature film about our local cryptozoological hero, Bigfoot. The movie, directed by Patrick Magee and starring Casey Gagliardi and Andrew Joseph Montgomery, opens at the end of this month. But locals will get a peek at the R-rated horror at 7 p.m. on Feb. 16 at a North Coast premier at the Eureka Theater ($10). The screening will benefit the restoration of the theater and be introduced by one of the Sasquatch flick's producers, local boy Edward Olson, Eureka High School's class of 1987. (Go, Loggers!) Expect to see plenty of familiar forest since, according to the Humboldt-Del Norte Film Commission press release, filming primarily took place at the Palmer Westbrook Ranch on the Smith River, which is also featured in E.T.: The Extra-Terrestrial. Check out the trailer below and tell us if you're feeling the Primal Rage.

The trailer checks off plenty of classic boxes: young couple lost in the woods, doomed hunters in plaid, sketchy Native lore, blonde in peril and some kind of witch. And is Bigfoot wearing a mask? Whatever. We're pretending it's not scary.

Blue Fox Entertainment's IMDB summary teases it thusly: "Lost deep in the forest of the Pacific Northwest, Ashley and Max Carr are stalked by a terrifying creature that might be Bigfoot. Soon they find themselves embroiled in a strange land of Native American myth and legend turned real. Hopelessly trying to survive, with a handful of unsavory locals, they must fight back against this monster in a desperate battle of life or death." #Humboldt, amirite?


Bigfoot is coming, and he's not happy.
Primal Rage, the Hollywood-produced bigfoot horror movie that filmed almost entirely in the redwood region during 2015 and 2016, will have an exclusive North Coast premiere February 16th at the Eureka Theater.
The film tells the story of a couple who end up lost while passing through the redwoods. As they try to find their way back to civilization, the couple soon realizes that there is something big in the forest with them, and it doesn't seem to be friendly.
Major scenes in the movie involving the 7-foot tall hairy monster were filmed on Smith River's Palmer Westbrook Ranch, whose property was also utilized for scenes in 1983's E.T.: The Extra-Terrestrial.
One major determination in filming in the Humboldt/Del Norte area was the availability and expertise of the local Film Commissioner, Cassandra Hesseltine. "We never would have been able to find the specific locations we needed to make this film if it wasn't for the Film Commission here. One call to her office, and everything fell into place within days" related Edward Olson, the production coordinator and co-producer of the film. Olson graduated from Eureka High School in 1987, eventually moving to Los Angeles. When the production was seeking someone familiar with Northern California, they hired him.
The practical effects used in the film, as opposed to digital effects commonly seen in modern movies, took nearly a decade to create. The painstaking work was done by MageeFX, the special effects shop operated by Patrick Magee, who also directed and co-wrote Primal Rage. Magee, with three decades of effects experience in Hollywood, has created effects for Spider-Man, Jurassic Park III, Alien VS Predator, and Men in Black 3. When screened at the Cinepocalypse film festival, Primal Rage received an enthusiastic reception from horror film fans.
The North Coast premiere, on Friday, February 16th, will be a benefit for the ongoing restoration of the Eureka Theater. Doors will open at 7 PM, with the film starting at 8 PM. Tickets are $10 and only available at the door. Come early, special screenings at the Eureka Theater can sell out. A portion of the proceeds will also go to the Clarke Historical Museum. Producer Edward Olson will be on hand to introduce the film.
At present, no other theaters in Humboldt or Del Norte Counties are scheduled to show Primal Rage, so this North Coast premiere may be the only chance to see it on the big screen before an eventual VOD and DVD/Blu-ray release.
Primal Rage is rated R by the MPAA. It includes scene of intense violence and isn't suitable for all audiences.