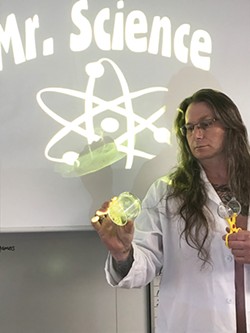 How do you approach an event that bills itself as "very dumb?" Well, you gather your friends who are so inclined (you know the ones) for a silly, fun and "very dumb" night and act accordingly. We're clearly talking about one event: The Mr. Humboldt Pageant. Back for its fifth year, the hilarity takes place Saturday, Feb. 10 at the Arcata Theatre Lounge with doors opening at 7 p.m. ($29).

"We started the pageant as a spoof and made it male for so many reasons," Mr Humboldt Pageant co-founder Johanna Nagan says. Turning the tables on traditional female beauty pageants that emphasize a cookie-cutter Barbie aesthetic, this one puts the mens on the menu and up on stage for good-natured revelry. And all for a great cause. The event raises money for local causes such as last year's recipient, Pacific Union School.

This year there are nine contestants of varying ages and backgrounds vying to be top dog, putting brains and brawn into four segments: Question and Answer, Beachwear, Talent and Formal Wear. "Each contestant has an alter ego they use throughout the night to tie in their theme. Mr. Rabbit and Mr. Science are a couple that will be at this year's pageant." Nagan says. The contestants are judged (not too harshly) on creativity, humor and their "Humboldtness" and those who don't make the cut are ceremoniously eliminated at the end of each segment.

Get your tickets now because, like a dude competing for a crown and a sash, they sell out quickly. Tickets are available at Brown Paper Tickets, The Works, Blondies Food & Drink and Arcata Liquors. The event is 18 and up because, at least ostensibly, we're all adults here.