Be a Warrior: A Seventh Grade Girl of Color Reviews A Wrinkle in Time 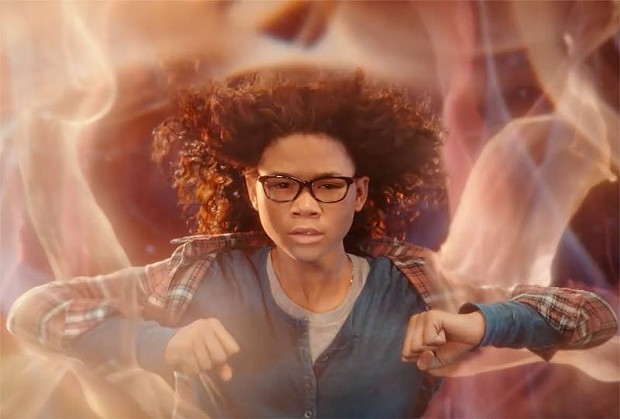 Last Wednesday night I had an opportunity to "Tesser" into Meg Murry's magical world when I saw Ava DuVernay's new film A Wrinkle in Time at the Humboldt-Del Norte Film Commission's local premiere. The film follows 13-year-old Meg Murry, her little brother Charles Wallace and friend Calvin, accompanied by the three Misses: Mrs. Whatsit, Mrs. Who and Mrs. Which, across the universe on a hunt to find Meg's father, a physicist whose passion was to travel through time and space, and who is trapped on the dark evil planet called Camazotz. I have been excited to see this film since the day my mother and I drove past Sequoia Park during the film's shooting. The costumes and makeup of the three Misses, as well as the colorful journey these kids take is amazing; it was great to see it all come to life on the big screen.


I connected with Meg immediately. I felt bad for her and at the same time knew how she was feeling - she struggles with some of the same issues I struggle with being in school, feeling misunderstood and sometimes like an outcast. Meg is really affected by the four-year anniversary of her father's disappearance and is tortured by the fact that no one believes he will ever come back. Even though she is dealing with all those things, she is still hopeful that her dad is alive and will come back to her family.

It was nice to see the relationship between Meg and Charles Wallace — although he is her adopted brother she loved him just the same as if they were biological siblings. After the IT took over Charles Wallace, Meg's dad was willing to leave him and save her, but Meg refused to go home without her brother. She fought to free him of the it even when the IT was attacking her. She tells Charles Wallace over and over she she loves him and he loves her and why they went to the Camazotz and that she would leave without him. Her love for him frees him from the mind control of the IT and then Meg for the first time starts the Tesser to get them home.

Overall, I recommend this movie to kids of all ages who may be feeling down on themselves and need a message of love and self-confidence. I will definitely be watching again - if for nothing else, to get another look at Meg's amazing hair and all those beautiful costume changes of the three Misses. I want to leave you with a message from Ms. Which. While standing with Meg, she asked her, "Do you know how many events had to go right in the Universe, just in the making of you?" I hope that this film reminds everyone of how special they are and that their existence is the intention of the universe.

Maya Youngblood-Smith is a seventh grader at an Arcata middle school. She enjoys running on the track team, painting and creating YouTube videos for her channel. Maya engages in activism at her school by being a member of the "Not in Our School "committee, which works to create a safer, happier and healthier school environment for her peers. She most recently was a cast member in her school play Beauty and the Beast and on weekends enjoys spending time with her family at the farmers market or walking through the Community Forest.

Cinema A Wrinkle in Time
Prev
Next