All Guts and Glory: An Interview with Sylvestris Quartet 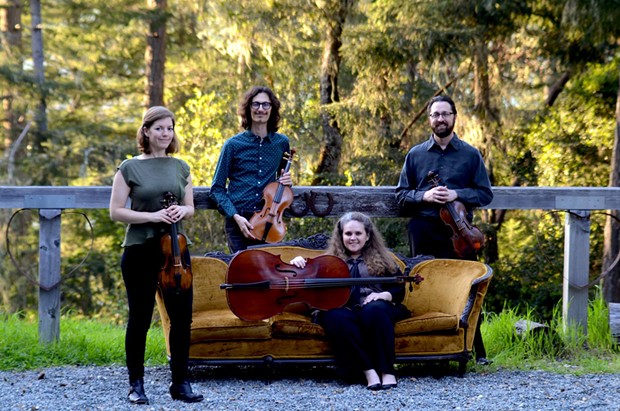 The Sylvestris Quartet are an all gut-string Bay Area group whose repertoire spans from the Baroque era to the 20th century. I interviewed violinist Anna Washburn and violist Aaron Westman via email to discuss their upcoming performance in Westhaven and what eschewing modern strings can entail for modern players.


What is the history of the Sylvestris Quartet?

Anna: Sylvestris Quartet has been together for about two years. We originally got together to make a recording for a project I was working on, but then decided to perform a concert at Berkeley Early Music Festival Fringe in 2016, and we’ve been together ever since.

Aaron: A string quartet is the perfect little microcosm of a democracy — in fact, its origins as a formal compositional form dates from the beginning of the first big experiment in democracy as a system of government. That means that it is at its best a glorious thing, but it can also be very contentious and is very sensitive to having just the right chemistry. It has been a personal dream of mine to have a string quartet that does this sort of things for my whole career, but only in the last two years, since getting to work with these guys, has it seemed like we hit just the right chemistry, and we have all been motivated to build an ensemble from that. And, it’s still a challenge, but it’s a wonderfully fulfilling one.

Where did the interest in gut strings come about for you and your colleagues?

Aaron: String players have played on gut strings for most of the history of violin playing. To put it another way, playing on metal strings is a very recent phenomenon. Yet, there is so much music that, nowadays, never gets played on gut. Although we set out to do some of that, we have become more interested in playing and recording so much of the later repertoire, into the 20th century, all the way up to about World War II, when steel strings became more in fashion. Because the beginning of our capability to record a string quartet only slightly dovetails with the end of the gut string era, there is much repertoire that was never recorded in that way. Many people in our field suffer from “chronocentrism” — the belief that everything we do now is better than it used to be. That’s just not true — style changes quite rapidly in music, as it does in fashion and art and writing. So, the goal is not only to play on gut strings, but also to study the style of the time period — as we have been trained to do with Baroque music — and to extend that attitude to late romantic and early 20th century repertoire.

What was the inspiration behind the "metamorphosis" themed program?

Anna: Gretchen (Claassen) our cellist gets all the credit for the idea. String quartets are conceived as entire works, so essentially you’re supposed to play all of the individual movements because they create a perfect set … But what if you do break them apart and use individual movements to create a bigger picture that tells a story about how music is changing over time, or in different places? It takes a lot of trial and error to make a program work out well, but our audiences have been very enthusiastic about it, and we find that we really delve into the theme and learn a lot too.

Do you have any words for the people of Humboldt County?

Anna: We are super excited to come up to Humboldt County! Personally, it’ll be my first time. Rob Diggins and Jolieanne von Einem are great friends, and we’ve heard a lot about their wonderful home, community and arts center. Also, we‘re always looking for great local brews … coffee and beer, and can’t wait check out the scene.

Sylvestris Quartet will play their program “Metamorphosis” on Wednesday, March 21 at 7:30 p.m. at the Westhaven Center for the Arts. Tickets are $5-$20 sliding scale.