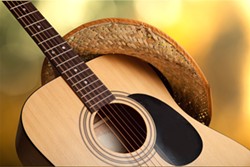 There's another fun rock 'n' roll daytime show at The Jam today. Talented local songwriter Cliff Dallas brings his "spaghetti western" band The Mojave Green across the bay from Eureka to join the fuzzy roots band Hollow Down at 2 p.m. The show is a benefit for the Arcata Vet's Hall, so your $5 door fee goes toward keeping that set of doors open and thus perpetuates a net positive for the local scene. Neat.

Yhung T.O., Slimmy B, Da Boii and Lul G are the kids who comprise the up-and-coming Vallejo rap collective SOBxRBE. Though barely born in the heyday of Mac DRE, these guys are operating in the wake of his East Bay Thizz Nation scene and are starting to get a lot of recognition lately. Come down to the Arcata Community Center at 8 p.m. for an all-ages shindig to see what all of the fuss is about. Cuban Doll opens ($30, $25 advance).