Digging It: An Interview with Diggin Dirt's Tyler Martin 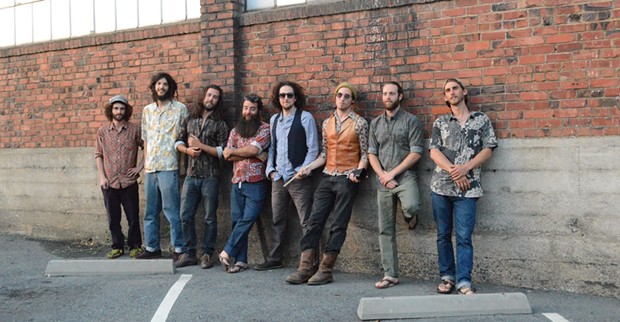 We caught up with Tyler Martin, baritone saxophone player from local funk octet Diggin Dirt, fresh off of a sold-out show at Humbrews to talk about the band's summer of festival sets, sharing the stage with idols and their Humboldt sound.

NCJ: I understand the band's profile has increased recently through your extensive West Coast touring. Do any shows in particular stick out for you?

Martin: Definitely Alaska was huge for us. Not only had a bunch of us wanted to hit that state for a long while, but it also went off better than we could have imagined. Our first set at Salmonfest was epic and our second set blew us away. The room was already practically over capacity during sound check. It was crazy cool to see that people really made a point to tell each other about the Dirt and make it to the set. From our side, we're making music that we love and are so fortunate to have a group of eight really stellar musicians. We've become a brotherhood, really, and we've been shown that the crowd can see that, too. Another show that really stands out is our High Sierra set … it was a highlight of our summer and really helped to elevate our status as an up and coming band on the West Coast. We were fortunate enough to have the first set of the fest and people were hungry for some funk. Honestly, I've never been screamed at so loudly by a crowd. It was an incredible pleasure and privilege to share our music with everyone that was there, and we were humbled and inspired.

NCJ: Are there any groups with whom you have shared a stage and jelled with?

Martin: We've had a great time sharing the stage with many different bands. My greatest pleasure was being able to rage High Sierra. We ended up spending some late nights with the guys from Fruition, standing on the side stage for Lettuce and Antibalas, and seeing some truly epic once-in-a-lifetime funk. The California Honeydrops, Pigeons Playing Ping Pong, the Motet, Turquaz, Fruition, Lettuce, Skerik, Lotus, Ernest Ranglin, Delvon Lamar and many others have shared a festival or two with us. Overall, we really grew as a band and were able to meet a lot of people who we have looked up to for a while. Mojo Green, Smokey the Groove and local afrobeat funksters Lovebush are all great friends of ours. Scott Pemberton, RADIO Veloso and Soul Ska also stand out in my mind as favorites.

NCJ: How has living in Humboldt and being a Humboldt band influenced your sound?

Martin: Humboldt is the definition of our sound. I don't think there's anyone in the group that has been in Humboldt County for less than six or seven years. Diggin Dirt has been a staple for a while in the local scene and we are so humbled by the love and support we get from the local community and from our fans. We wouldn't have it any other way and all we ever hope is that we can give back a fraction of how much we've been given. Humboldt County is truly the lifeblood and foundation for this group, and it's a place we call home in a very deep way. We've been traveling the West Coast and I can say with confidence that there's no other place we'd rather be.

NCJ: What is next for Diggin Dirt?

Martin: Up next is a few little trips to SF, Portland/Eugene, and Idaho. We may or may not be recording a new album this fall ... not sure if I'm supposed to mention that yet but it's safe to say that there's a lot more on the horizon. 2018 went above and beyond anything we could have expected and we sure aren't gonna stop any time soon. We're diggin that dirt and there's plenty more to come, no doubt about that.