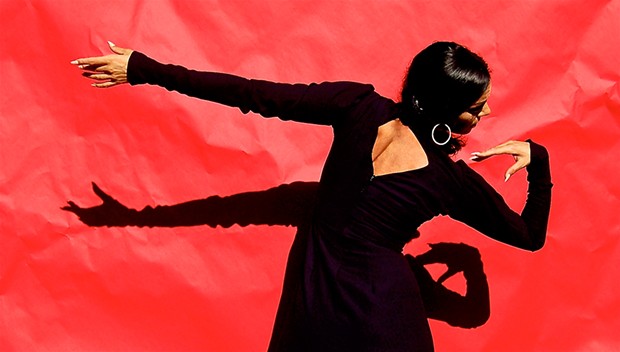 A little fall fire is swirling our way and not just in the form of leaves. Seattle-based Flamenco dancer Savannah Fuentes brings her rhythmic heel, heel, planta, planta magic back to Humboldt in Diamantes de Color (colored diamonds), An Evening of Flamenco on Friday, Sept. 21 at 8 p.m. at the Bayside Community Hall ($34 VIP reserved, $20, $15 students, $7 child).

The passionate dance is characterized precision, poise, graceful arm movements and the opening of the heart by the outward expression of the torso. It is considered one of the most (if not the most) powerful female dances. Flamenco refers not only to the dance but the integral components of music and singing that accompany it. Fuentes will be joined by two outstanding Spanish flamenco artists: acclaimed Spanish-Romani guitarist Pedro Cortes and singer/percussionist/dancer Jose Moreno. Cortes, a third-generation flamenco guitarist from a family of "Spanish Gypsy" guitarists, has toured extensively since he was 17 and was commissioned by the Cohen Brothers to compose music for the film Paris Je T'Aime. Moreno hails from a family of famous flamenco artists — mother Estrella Morena (dancer) and father Pepe de Málaga (singer), and has worked with distinguished artists such as Isabel Pantoja as a cajón percussionist and alongside flamenco guitarist Jose de Luna.