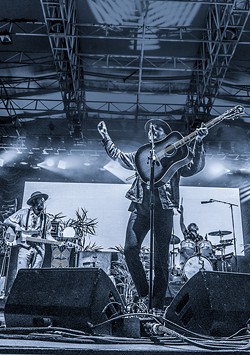 Indie music has been a genre for so long that the term has functionally lost all use as a descriptor. It now includes acts who are certainly not independent in any meaningful sense of the term and therefore has joined the ranks of blues, jazz, rock and rap in the pantheon of genres that have been watered down into homeopathic neutrality. One act often included under the indie folk heading is the massively popular band The Head and the Heart, who sound to my ears like easy listening music for tech workers who enjoy crocheting, artisanal cider and haircuts with bangs. But don't listen to a balding asshole who still unironically enjoys early Cure and Van Halen and late Bad Brains and Judas Priest records, and who has crashed prematurely onto the gray beaches of a mid-life crisis. Listen to your heart and consider seeing these heads at the Arkley Center for the Performing Arts tonight at 8 p.m. ($76). J.S. Ondara opens.

White Deer is a local country and blues quartet featuring members of local acts Kindred Spirits, the Spin Drifters and the Scratchdog String Band, who could genuinely be considered an indie folk act and play pretty and original acoustic tunes designed for warm wooden rooms. The band will be playing a free one tonight at 9 p.m. at the Logger Bar, which happens to be one of the very best of those rooms our county has to offer.