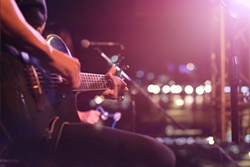 Julian Lage is a world-class jazz guitarist from Santa Rosa who, as a single-digit aged wunderkind, was the subject of a documentary called Jules at Eight. The subsequent decades have been kind to Julian. He has built up an impressive resume touring the world with heavyweights like Gary Burton and Nels Cline. He brings his phenomenal trio to Fulkerson Hall tonight at 8 p.m. for an evening of virtuosic jazz ($39).

Two hours later at The Jam, you can find a full set of rock-informed psychedelic dance music when Redding's Gringo comes to town to jam with local blasters The Apollo Era and Paradise Inc. ($5).