Off on a Tangent: An interview with Steven Wright 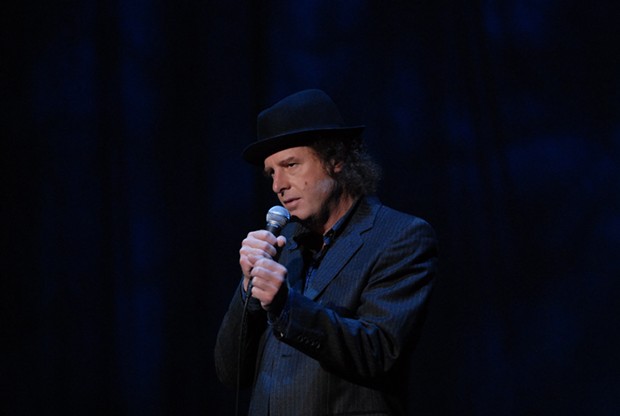 If you don’t know his name, you know his visage and presence. His cadence and playful monotony have made him a stalwart of the standup comedy scene for nearly four decades. If you’ve somehow missed all of the last 40 years of standup, you likely still know him from any one of his multiple major motion picture cameos. Steven Wright started standup in Boston in 1978 at the age of 23. Now, at the age of 62, he still has the market cornered on the avant strange. On Sunday, Oct. 21 at 8 p.m., Wright is bringing his must-see weirdness to the stage of The Arkley Center for the Performing Arts.

His style, though frequently emulated by newer comics like Demetri Martin, is unique in both its form and function. It’s not satire, not outright. And it’s not quite storytelling, either. His sets are almost like a series of absurd vignettes, loosely connected but flowing nevertheless. Like dreams but with the gift of extemporaneous reflection — Dali paintings with a punchline.

I had a brilliant list of insightful, well-researched questions to interview him, none of them canned, I swear. They were the perfect mix of casual professionalism, hilarity and my trademark remarkable modesty. This is something you’ll need to take my word for, as my over-prepared nerdery was no match for Wright’s curiosity.

As soon as I am done explaining just how far away Humboldt is from what non-locals refer to as “Northern California,” his voice filled with whimsy, “You live where the redwoods are!” Then, began an amazing slew of questions, not from me, but from Wright. Wright reacted to most of my answers with jocular laughs/giggles and exclamations of “Wow!” His tone was never condescending or elitist; he truly wanted to know everything he could about the odd life and history of Humboldt County. In particular, he was captivated by all aspects of the local ecology. “Nature is ... I love nature,” he says before he tells me about his own preference for a bucolic retreat: Block Island, off the coast of Rhode Island. His brother owns land on the island and it’s a place of tranquility and beauty for Wright. I described Humboldt’s massive swaths of redwood rain forest, the breathtaking wonder of growing up surrounded by something so seemingly prehistoric.
When the conversation drifted toward inquiries about industry and culture (Wright’s ability to initiate tangents pales only in comparison to his ability to bring a conversation back around to its original point), he gently interrupted to say, “They didn’t cut down the redwoods did they?” I’m not sure if he actually Googled Julia Butterfly but he was thrilled to have a name to fit the description. “That must not be her real name, right?” Humboldt County, I told him. “Maybe I should spend a couple of days there. No, really, I mean it.”
He was insistent that he knew the word Humboldt from somewhere else but couldn’t place it. I gave him the obvious answer everyone from here is used to giving: Mary Jane.

“Oh, I forgot about pot,” he said with a chuckle. “Wait a minute, do you smoke weed?”
“I do.”
“Are you high right now?”
“No. I sorta wanted to be clearheaded, you know, nerves and professionalism and all.”
“Could you call me back when you’re high?” Then his brain opened another tangential tributary, “We could do two different interviews. Wouldn’t that be fascinating!” Though Wright used the words “surreal,” “insane” and “weird” as self description, I really think he should add “fascinated” to the list.
It didn’t take long to realize that second to his love of nature, Wright is extremely literary. His love of the surreal extends to books, which is evident in his taste and his own writing.

When asked why he became a comic and not a writer, his answer is quick and concise. At 16 years old, he’d watch the comics on Carson every night, then watch them head over to the couch after their sets. From the ages of 16-18 he spent every Sunday night listening to a local Massachusetts radio show that would play two comedy albums back-to-back. “I just got it in my head that this what I was going to do.”

Technically, all of this did answer my first hard-hitting question, “Have you ever been to Humboldt County?” But nearly an hour went by before I got around to asking my gotcha-follow-up: How come you don’t Twitter anymore?

Wright says he stopped tweeting because “jokes are a live thing.” This is a fairly standard response from people who have left the anxious whirlwind that is social media. From Wright, though, there’s an earnest truthfulness in the statement. In the hour-plus that Wright and I spent talking, we covered everything from the fall of the major timber industry in Humboldt, the first time we both saw a surrealist painting, the etymology of our middle names and so much more random information. Human interaction and a larger understanding of everyone’s experiences were a driving force of our conversation. And those are rare qualities these days.

It’s reason enough to take a break from the mundane coldness of reality and dip your toes into the waking-dream world of Steven Wright.