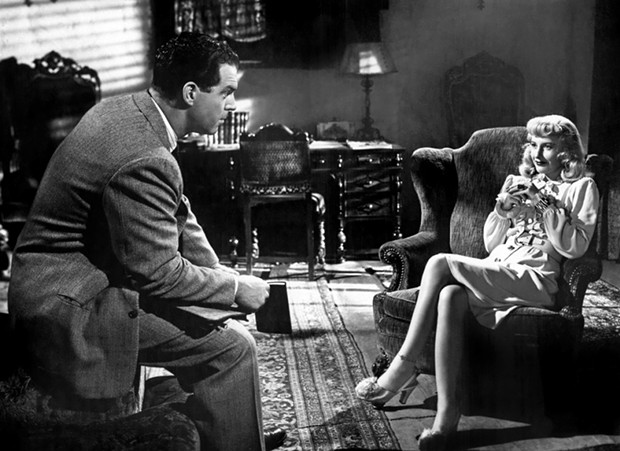 Listen, sweetheart. It's a crazy, mixed up world, especially in director Billy Wilder's 1944 uber-noir Double Indemnity, playing at the Eureka Theater at 7:30 p.m. on Friday, Nov. 16 ($5).

Fred MacMurray — that's right, kid, the wholesome fella you knew from My Three Sons — stars as Walter Neff, an insurance man who falls for the wrong dame. He's no choir boy and with a little coaxing from the smoldering Barbara Stanwyck as Phyllis Dietrichson, a scheming wife looking for a lucrative way out of her marriage, he's setting up a fraud and a murder. Normally a rumpled and ruthless gangster, Edward G. Robinson shows up as Neff's claims investigator coworker, who smells a rat or two. Little does he know, the rats are about to turn on one another.

I suppose you're looking for classic noir moments — shadows and cigarette smoke, crooked dames and bad guys. Well there's plenty, pal, plenty. All that and a girl named Lola. Say, you look like you could use a drink. Put on your best incognito shades and leg it to the lobby for a cocktail (benefiting the theater's restoration, of course) when the doors open at 7 p.m. It's no use trying to be good, baby. We're both rotten.