"This is a Load of Barnacles": SpongeBob Super Bowl Backlash 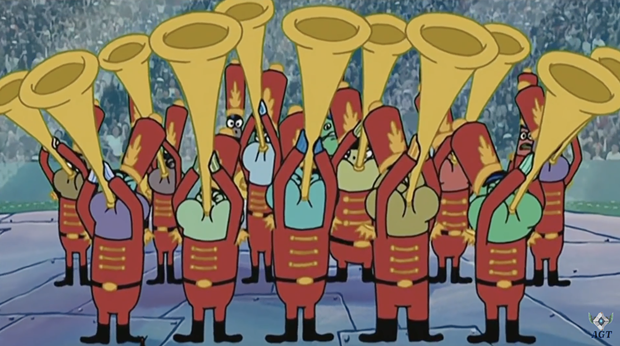 Over the last several months, more than 1 million people signed the Change.org petition to honor Stephen Hillenburg, the creator of SpongeBob Squarepants, with a performance of the aquatic cartoon anthem "Sweet Victory" during the Super Bowl halftime show. The 57-year-old Humboldt State University graduate died in November of last year after battling a neurodegenerative disease. The petition proposed the performance as “a tribute to [Hillenburg’s legacy, his contributions to a generation of children and to truly showcase the greatness of this song.”

Then, in late January, half time headliner Maroon 5 released a Super Bowl teaser on Twitter that included a brief appearance by SpongeBob. Fans saw this as a sign that their request for a musical homage to Hillenburg would be fulfilled.

They were thoroughly disappointed when it wasn’t. (Watch the clip below to experience the disappointment all over again.)

Though SpongeBob and his undersea pals did make a brief appearance during the halftime show — for approximately 15 seconds — "Sweet Victory" was never  performed. Instead, those clips were used to introduce rapper Travis Scott, who then went on to perform his hit song "Sicko Mode."


Shortly after, the internet was ablaze with memes mocking SpongeBob’s too-short cameo. Some were simply happy SpongeBob got any airtime at all.

Before his death, Hillenburg and his wife donated $135,000 to his alma mater HSU “to provide grant awards for student research projects in marine biology, oceanography and marine fisheries,” according to a September release from the university.

Salve your pain with a real taste of "Sweet Victory."