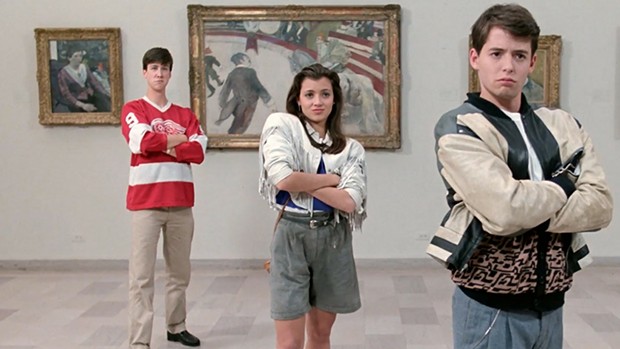 The light and the dark converge at the Arcata Theatre Lounge this week with a couple of iconic films.

You recall the scenes. You quote the movie. You know who's a righteous dude. Ferris Bueller's Day Off (1983), John Hughes' comedy about a trio of high schoolers who play hooky by spending the day in Chicago, plays Friday, March 22 at 8 p.m. at Arcata Theatre Lounge ($5). Ferris, his girlfriend Sloane and his best friend Cameron make the most of their day off tooling around the Windy City in a Ferrari and hitting all the landmarks. (Not like when my friends and I would cut class and sit at Denny's on Fourth eating fries and doodling on coffee coasters.) The kids explore the Art Institute of Chicago, Sears Tower, Wrigley Field — even sing and dance atop a float during the Von Steuben Day Parade — all while outrunning/outwitting their school's principal and making it back home before anyone's the wiser. Oh, yeah.

The no-budget indie horror came out of nowhere and spawned a franchise of five films, predates Halloween, Nightmare on Elm Street and others in the genre, and inspired masters like Wes Craven. In it, two brothers find themselves entangled with the Tall Man, a sinister funeral director, and his horde of cloaked zombie dwarves. The boys fight to stay alive amid a sprawling funeral parlor, a mausoleum with winding marble hallways and severed fingers that bleed yellow and crawl about on their own. Not a fan of '70s surrealism gore? Don't worry, the Tall Man and his silver sphere will hook you.