From the Mouths of Bands: Spin's Faith No More Flashback 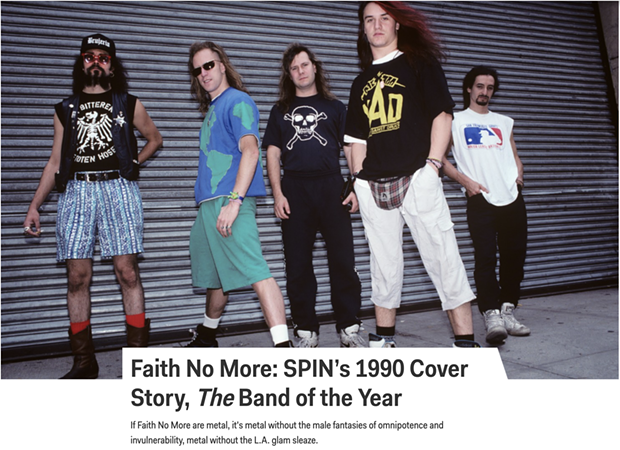 Who's feeling nostalgic for '90s Humboldt County — you know, the way it used to be 30 years ago — and/or alt-rock/metal played by yell-y, long-haired dudes in high-tops who hail from said Eden? If that's you, please enjoy this throwback Spin interview with local boy Mike Patton of Faith No More from 1990, re-upped by the magazine in celebration of the 30th anniversary of the band's album The Real Thing. It's worth it just for the hyperbolic descriptions of his hometown back in the day.


"A five-hour drive north of San Francisco, among the California redwoods, is the coastal town of Eureka, the David Lynch-ville that Mike Patton calls home. Eureka has recently been in the news as redneck loggers battle concerned environmentalists over the issue of deforestation. “The loggers there are fucking nuts,” says Patton. “These people would be protesting, sitting up in the trees, and they’d fucking cut the trees down with the people sitting in them. It’s great.”

As you might expect, Eureka is hardly a fun city. (“In Eureka,” adds Patton, “we drink a lot of coffee if we think there’s something worth staying up for.”) Reading pornography is a major pastime, as is playing at the local water-treatment plant, jumping freight trains, and riding around town waving baseball bats at hippies."

I've got questions. Some are about "reading pornography," some are about the profound lack of fact checking at Spin circa 1990 and some about whether anybody bothered to call Mike Patton to see if he was available to handle Eureka's tourism marketing. Because that could have been something. Read the full interview here.