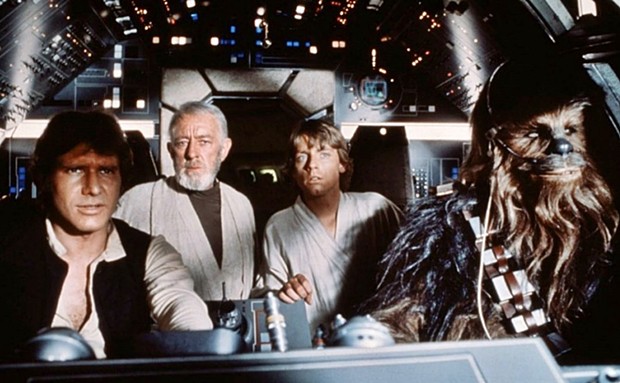 Magic Mirror, on the wall, what’s the best Star Wars of all? Answer: Episode IV or V. (That’s Star Wars and The Empire Strikes Back to us first-run ticket holders) That’s it. The only two contenders in this debate. Sabers down. Discuss amongst yourselves. And if you need a refresher, both sequel-spawning space fantasies are playing this weekend at the Eureka Theater. So, slip into your hooded Jedi-robe, clear your throat (or don’t) for your best Wookiee howl and get ready to mouth trumpet John Williams’ iconic score along with the rest of the crowd during the opening crawl.

“The film that started it all in a galaxy far, far away.” Follow the Force to Fourth Friday Flix: Star Wars: Episode IV A New Hope screening Friday, July 26 at 7:30 p.m. at Eureka Theater ($8). The good folks at the theater tell us the Cantina will be open at 6:30 p.m. for galactic cocktails. And, I wasn’t kidding about that Jedi-robe, cosplayers and costumes welcome.

Hell Hoth no fury like rebels overthrowing an oppressive dictatorship. Come back Saturday, July 27 for more Empire/Alliance action with Luke, Han, Leia, Chewie and everybody’s favorite droid duo, plus the introduction of a little creature named Yoda and the beastly slug Jabba in Star Wars: Episode V The Empire Strikes Back, playing 7:30 p.m. ($8).

The Eureka Theater this weekend is where it’s AT-AT for arguably cinema’s most epic battle of good vs. evil. Pick your side and suit up. We’ll see you there.