August 23, 2019
comment
Congratulations, Eureka, you have your first poet laureate. David Holper, a 61-year-old professor of English at College of the Redwoods and brave judge of the NCJ annual Flash Fiction Contest, got word of his selection this week and a press release from the city is expected soon. Holper is a graduate of the University of Massachusetts at Amherst's MFA English program and his second book of poems The Bridge (available in local bookstores) was published this year. You may have seen a poem or two of his in the Journal (catch up here, here and here for starters). 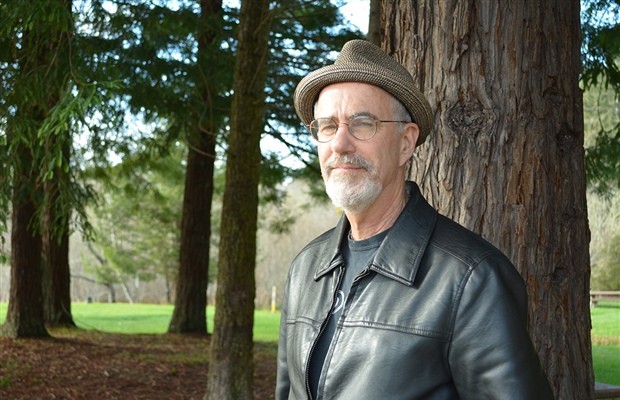 The position, created this spring, is the brainchild of  Eureka City Councilmember Leslie Castellano and Kristi Patterson of Trajectory, an Ink People project. Castellano felt a poet laureate would be "a strong component of what Eureka is trying to do in terms of arts and culture." The pair brought a proposal before the Eureka Arts and Culture Commission for approval and to hammer out the program.

The commission chose Holper from among 13 applicants whose identifying information was removed for anonymity, leaving three poems and proposals for community projects for review. Holper's proposals include an online database of local poets who've published books, a poetry contest in the name of David Josiah Lawson and a contest inspired by the Visible Poetry Project, in which he took part, that will partner poets with visual artists.

The poet laureate's duties include giving a local reading and writing four poems about Eureka and its environs. “I have no poems about Eureka, so I’ve gotta get going on that,” says Holper. He's already active on the public reading scene, though, having read at the Morris Graves Museum of Art, the Humboldt Poetry Slam and Bayside Books with a couple gigs coming up in September.

Asked about the pay for the gig, Holper admitted he didn't know what it would be.
The stipend is a $250 honorarium, nomination to the California Poet Laureate position and the printing of broadsides or a chapbook of the poet's work. The money, such as it is, isn't Holper's motivation.

Instead, Holper cites former national Poet Laureate Billy Collins' visit to Humboldt State University. He recalls Collins, who focused his tenure on popularizing poetry, talking about the job and saying, “Poetry is the emotional history of the human race.” Meeting California Poet Laureate Dana Gioia, who was doing readings in every county of the state, was similarly inspiring.

“I’m just going to make as much effort to get poets to perform or submit their work,” says Holper. As a teacher who regularly hears students groan at the prospect of studying poetry, he wants everyone to see it differently, to know “It’s not just dry and boring. ... Poetry gives people a way to talk about things they couldn’t say in other ways.”

If you're interested in becoming the person to whom Holper passes his laureate laurels next year, check out the requirements on the Ink People website here.