April 16, 2020
comment
Despite the Mad River Festival being pushed back to September and a handful of scheduled performances canceled due to shelter-in-place orders, Dell'Arte International is not sitting idle. In a press release, Artistic Director Michael Fields says, "Uncharted times call for innovative creativity and collaboration." Sounds like a job for Dell'Arte. The theater folk in Blue Lake are putting together a schedule of Zoom-based artist talks with key Dell'Arte players, as well as releasing past performances on the organization's Vimeo and YouTube channels. 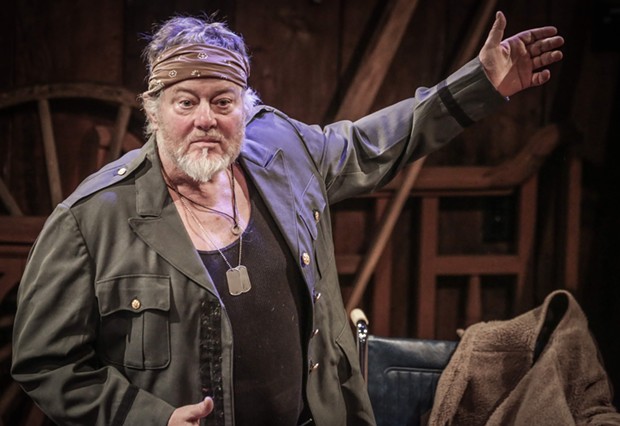 You'll be able to watch Radioman, Mad Love, Punctual Folly and Mary Jane: A Musical Potumentary from the comfort of your home. "In lieu of ticket sales for the online shows," the release states, "Dell’Arte is instead requesting donations to fund scholarships and the ability to keep the people at the heart of the organization." For details and the full schedule, see the press release below.

BLUE LAKE – In an effort to stay connected amid increased physical distance, Dell’Arte International is going online with original performances and monthly Artist Talks held live over Zoom with its founders, faculty and community.

“As we navigate these uncertain times, one thing is clear – the arts are necessary now more than ever,” says Founding Artistic Director Michael Fields. “Uncharted times call for innovative creativity and collaboration. We’re thrilled to infuse the community in these ways and look forward to when we can gather again in person.”

Dell’Arte will release classics such as “Mad Love” circa 2012, “Radioman” circa 2019, and even the crowd favorite “Mary Jane – a Musical Potumentary.” All will be rolled out on video platforms such as YouTube and Vimeo; stay updated by following Dell’Arte’s social media channels and website.

To commemorate the first online season, a virtual Artist Talk via Zoom is slated for Thursday, April 30, and will feature a conversation with Dell’Arte co-founder Jane Hill, and founding artistic directors Joan Schirle and Michael Fields, who have been involved in the organization since its formative years.

The first show – “Mad Love” – stars Michael Fields, Joan Schirle and Donald Forrest, an ensemble responsible for more than 15 collaborative works since 1977. Adapted from the 1935 expressionist film starring Peter Lorre, the play tells the dark tale of a brilliant surgeon who replaces the damaged hands of a concert pianist with the hands of a murderer. Set in the “Theatre of Horrors” and given a unique Dell’Arte spin, “Mad Love” explores the thin line between horror and humor, exploring the power of suggestion and its effectiveness as a controlling device.

The full Online Season, subject to change, is:

The already rescheduled “Keep the Fires Burning” Cabaret will not be happening as planned this week, and the annual Mad River Festival, slated for June-July, has been postponed until September. In lieu of ticket sales for the online shows, Dell’Arte is instead requesting donations to fund scholarships and the ability to keep the people at the heart of the organization.

“Our current students have already put so much time, commitment, energy and resources into their programs at Dell’Arte,” says Fields. “Our primary goal is to support them as best we can through this time and continue providing top-tier education in this transition to distance learning.

“Together we will persevere and find comfort and joy through staying in touch.”